We were pleasantly surprised when we pulled in to the Valley Sunset RV Ranch in Delta. It fit our needs perfectly, people at the campground were friendly, we had full hook up, it was cheap and we hadn’t realized it was “Smack Dab In The Middle”  of so many towns and sights we wanted to visit, but because of our size many campgrounds were not able to accommodate us. So from here we could see it all.

Just down the road from the RV park is a drive-in theatre which must be very popular as they change the films every couple of days. Sad to say the program starts too late for us.

Delta, nicknamed city of murals, was named for its location on the delta where the Uncompahgre River flows into the Gunnison River.

It’s a nice little town with a large city park, Confluence Park, with its various exercise machines dotted around the lake.

They’re really into their classic cars too. 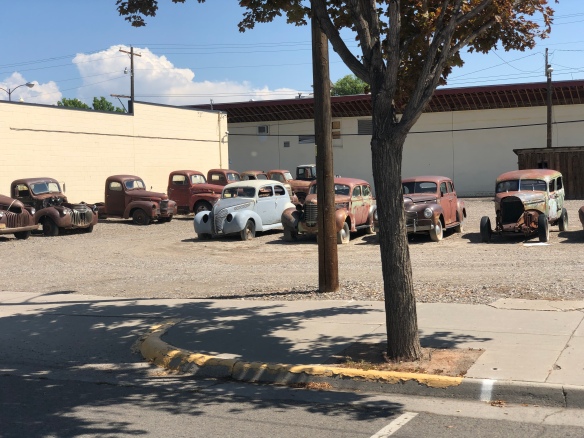 We attempted to ride the “official” bike trail, but it didn’t take long to realize we’d bitten off more than we could chew, so we made it back to the lake and tried again on the less strenuous trail. 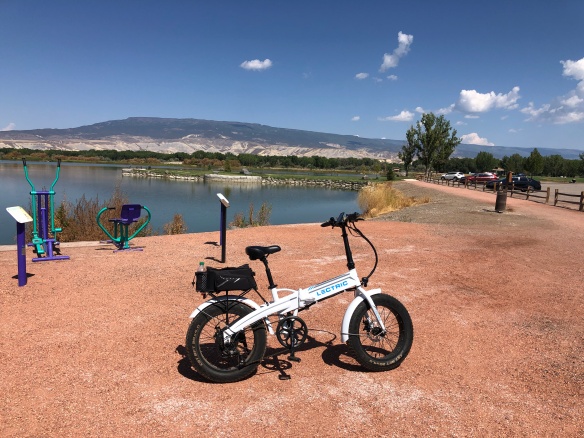 From where we were, the Grand Mesa was about 40 minutes away, via Cedaredge, a pioneer town and Orchard City, peaches in August and an apple festival in October.

Grand Mesa is the worlds largest Mesa, ( I’m sure someone else has made that claim) It’s 500 square miles and over 10,000’ in elevation and boasts 400 trails and 300 lakes. it was also about 30 degrees cooler up there

The scenic byway is 65 miles long, and without a map as the visitors center was closed, we were lost a few times, but we did get to see some glorious sights we might not have otherwise seen

Once again, very few people about, this is great way to get through a pandemic.

Another 40 minute drive away to the southeast was Black Canyon. 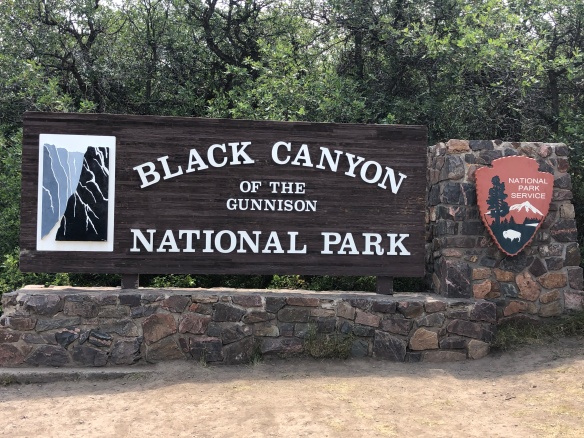 We’d never heard of it, but not long after we entered we had many “WOW” moments.

As we drove around the canyon it was one amazing view after another. It’s a narrow canyon with sheer granite walls 2000’ deep and the Gunnison River carving its way through, dropping an average of 95 feet per mile.

The Painted Wall whose patterned wall was formed when molten lava seeped into the joints of the existing wall and hardened. The Empire State Building if placed on the canyon floor wouldn’t even reach halfway up

Just to the northwest, in fact just off Main St Delta was the road leading to the Dominguez- Escalante National Conservation Area.. The only information we had was there was a bike trail called the Escalante Rim Rd., so we decided to take a drive. 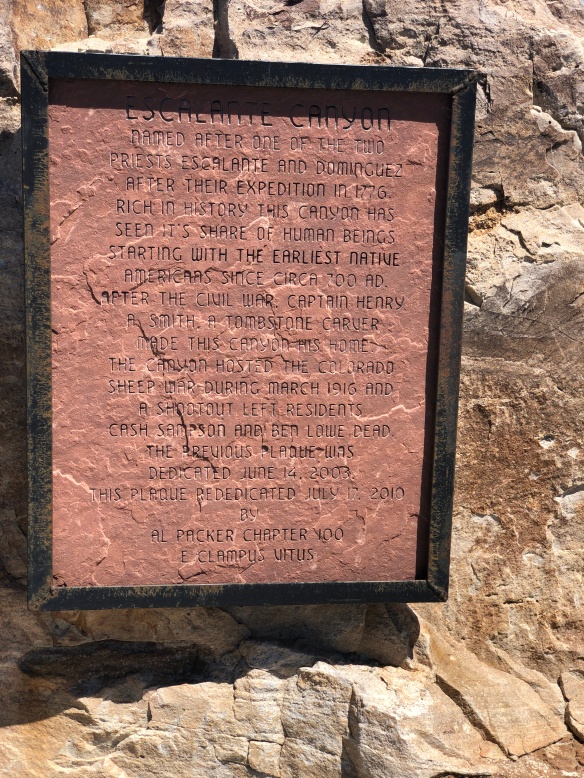 We drove a few miles through quite barren terrain and had no idea where we were going. The trail occasionally forked and we just looked at each other, not exactly anyone around to ask.

The plant life is pinyon juniper and the Ute Tribes consider these lands an important connection to their ancestral past. There are 115 miles of streams and rivers and 30 miles of the Gunnison River flows through it. It comprises of  210,000 acres between Delta and Grand Junction. What a place to get lost, but we’re so used to it at this point it doesn’t phase us.

Then suddenly we came across a small overlook, almost missed it and had to drive back 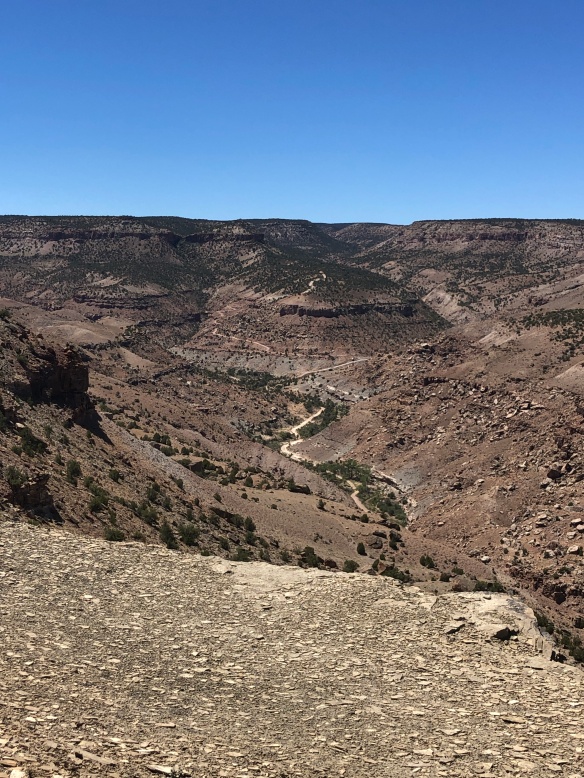 We saw a winding road down at the bottom and figured we should probably try to find an access to it, turned out to be an intermediate Jeep trail as we know it

And off we go into the abyss

We survived all the shelf trails and ended up at the rear of someone’s ranch, they waved to us, so all was good. 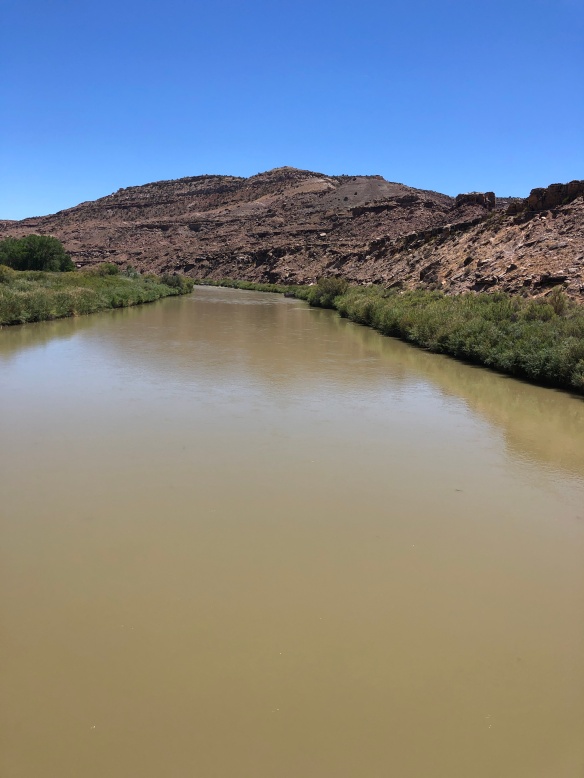 After our adventure a bite to eat at Butch’s about the only restaurant in Delta that has outdoor dining. Not very good, but OK in a pinch, we were the youngest patrons by 20 years, and all the food was soft and mushy just how they liked it. 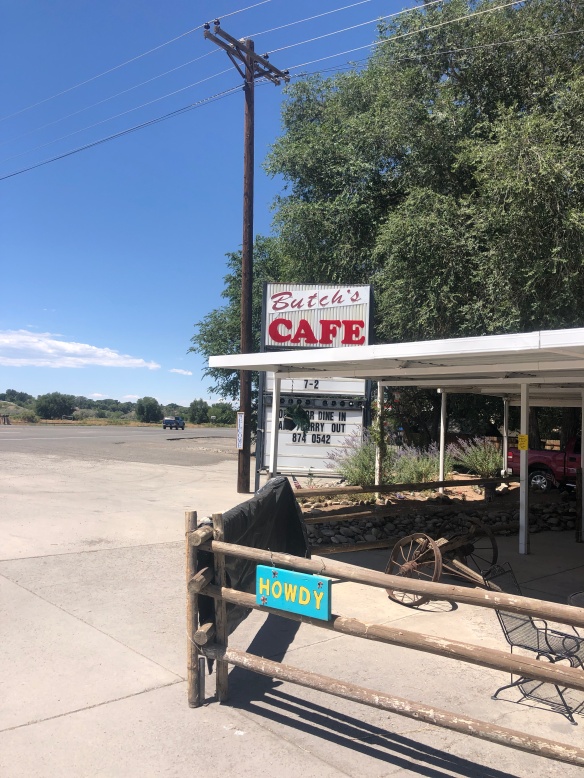 So many fruit and vegetable stands, this one also had a contraption out back that was roasting peppers, they were delicious. 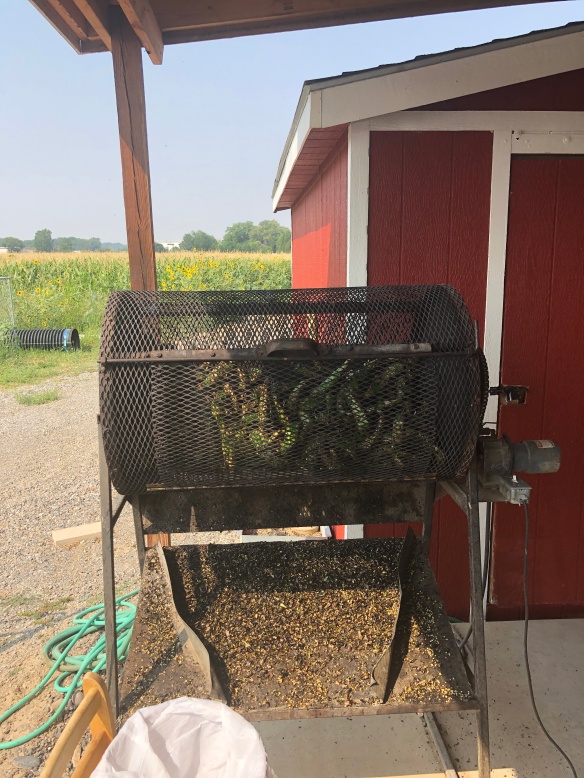 So many places still to visit in this area within a 1 – 1 1/2 hour radius. One day we drove the coach into Grand Junction to the Newmar dealer to get some parts ordered as the mechanism to lock our bay doors burned out. We’ll go back next week to have the work done..

The 10 mile stretch of road between Delta and Olathe, our neighboring town is corn, corn and more corn. It’s delicious too. The town itself is only 1.5 square miles and unfortunately their yearly corn festival this year was cancelled.

Montrose is another 12 miles south, more of a hustle bustle town and home to our closest Starbucks and drug store.

Time for some lunch, an outside table for 2 will do nicely 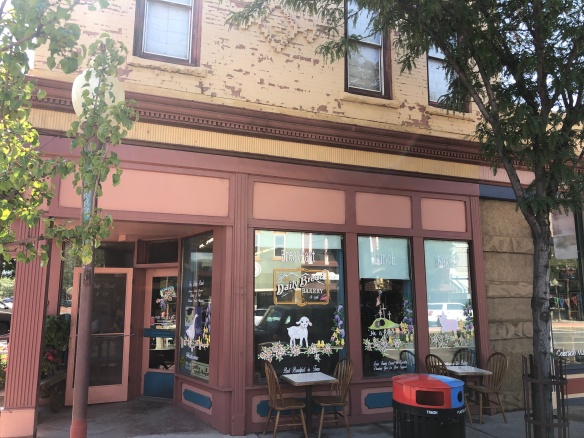 Montrose is known as a manufacturing hub for outdoor products. Fly-fishing and bow hunting manufacturers as well as tent, tipi and  yurt makers

A statue for every corner 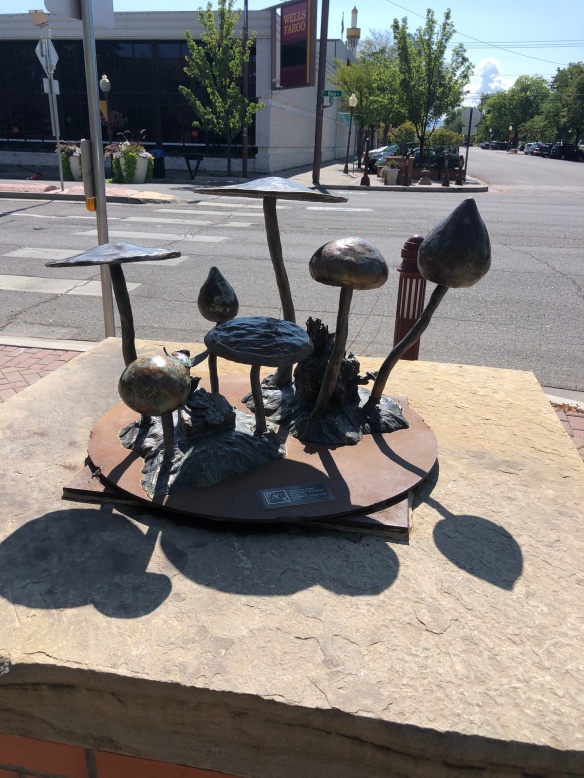 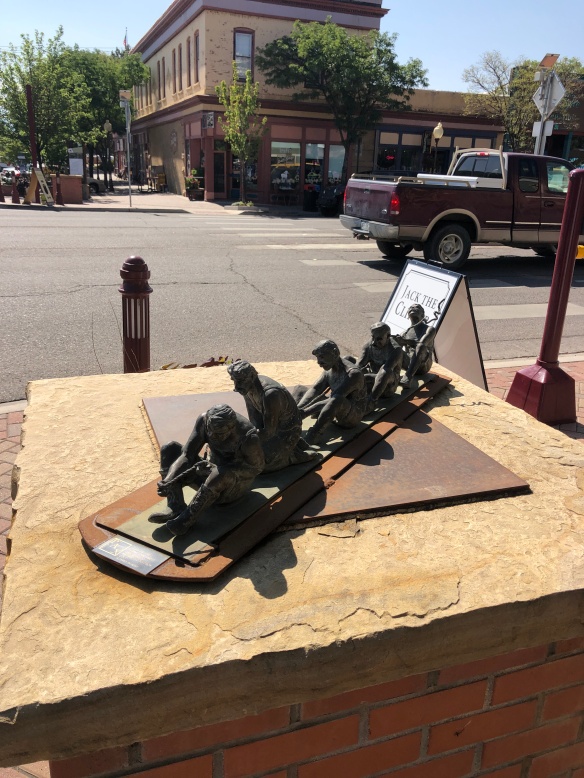 Next, more of our day trips from our home base (Delta)