We left the Apache Junction area and headed south towards Florence AZ for another 4-Wheeler gathering.  We had 2 nights to fill before the event started so, we decided to use our new Harvest Host membership. The individual  hosts offer overnight camping at wineries, farms, breweries, museums and some quite unique locations. 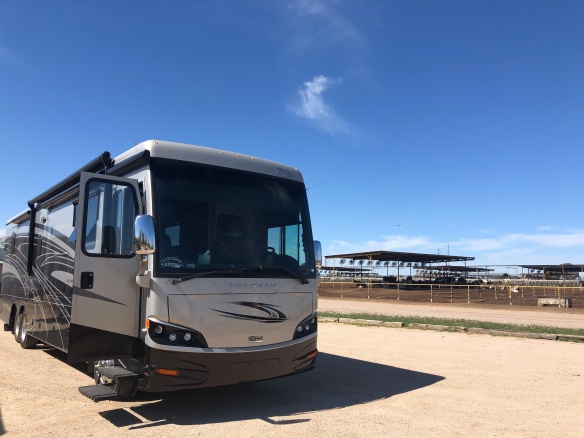 Our first stop was at Superstition Farms, which turned out to be an odd experience. No reception when we got there, just a sign and another coach parked there. It appears our hosts had possibly cancelled their membership and we were their last guests. 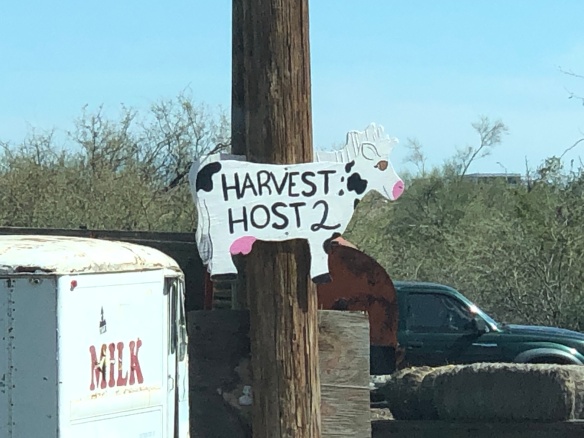 So we pulled in and met our neighbors, 2 people from Wisconsin who spent the evening with. Turns out, they spent their time visiting Renaissance Festivals, not something we’ve ever done.

So many cows, There  were 2000 dairy cows in total who were quite social. Our Wisconsin neighbors  were very familiar with dairy farms, so we got an education from them. The cows were milked twice a day, and we watched as they meandered in and out the milking shed. Every time we went to the fence they walked over, we thought to socialize, but apparently they were expecting food.

Unbelievably the area didn’t smell of cows at all. Someone was driving around them most of the day poop scooping, maybe that helped.

Next day, we moved to The Windmill Winery about 20 miles away.. Parking was in the rear of the property where 4 other coaches were parked.

On the way to the tasting room to register, we happened upon this chap with his dog and team of borro who offered us a tour of the property. 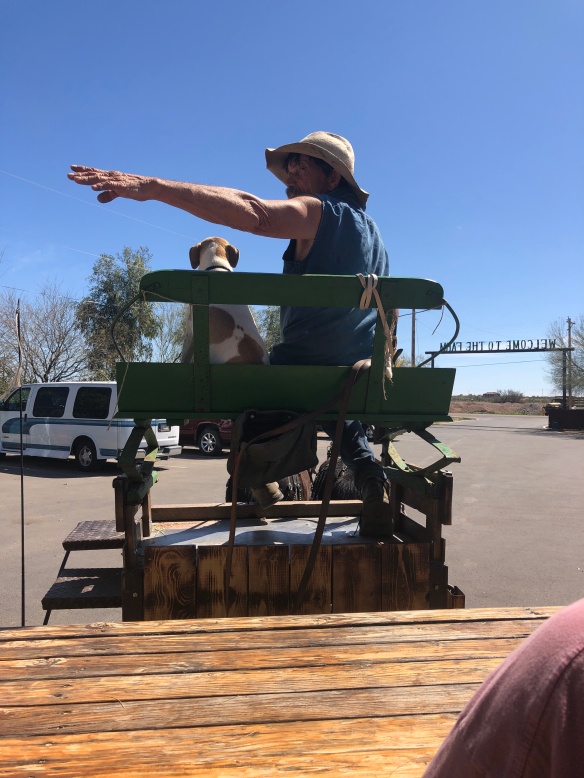 Harry Garcia, the donkey was resting before his performance at the upcoming weddings. 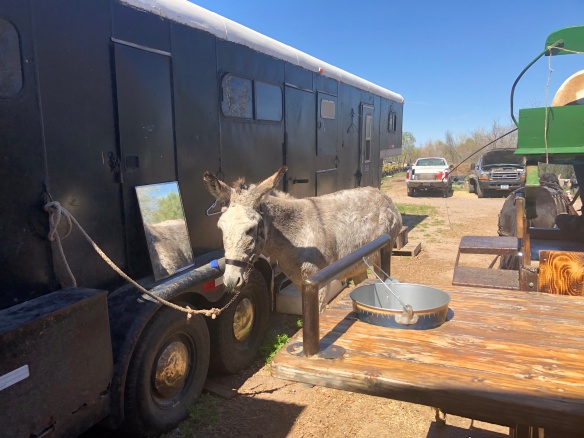 This is a very popular venue for weddings, having about 250 a year, there were 2 happening that day.

The tasting room was a very warm and inviting place which also offered outside patio with bar. 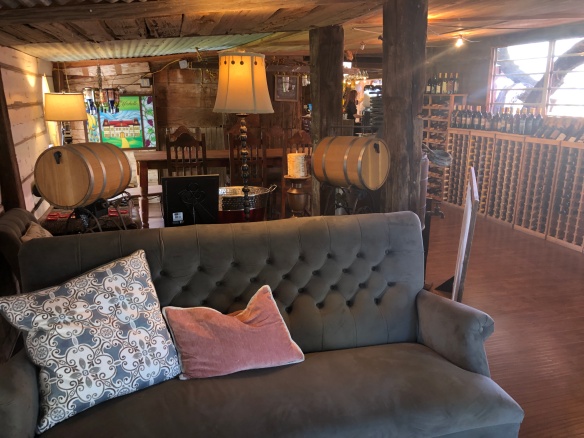 We were entertained by a solo musician which was a delight.

Even Harry Garcia reappeared after his duties were completed.

Not sure how much we’ll use this Harvest Host membership in the future, but it might be good for the odd night. (It seems you can only stay at each location one night)

We were only a few miles from the 4 wheelers meeting point at Country Thunder in Florence, AZ which is a country music event site.  Many of the Jeepers we met at Quartzsite were there and we meet many more as the days progressed. 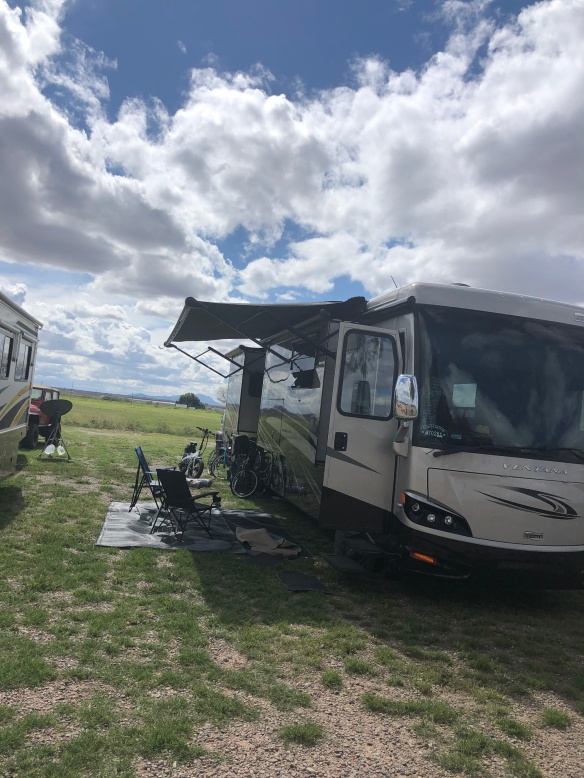 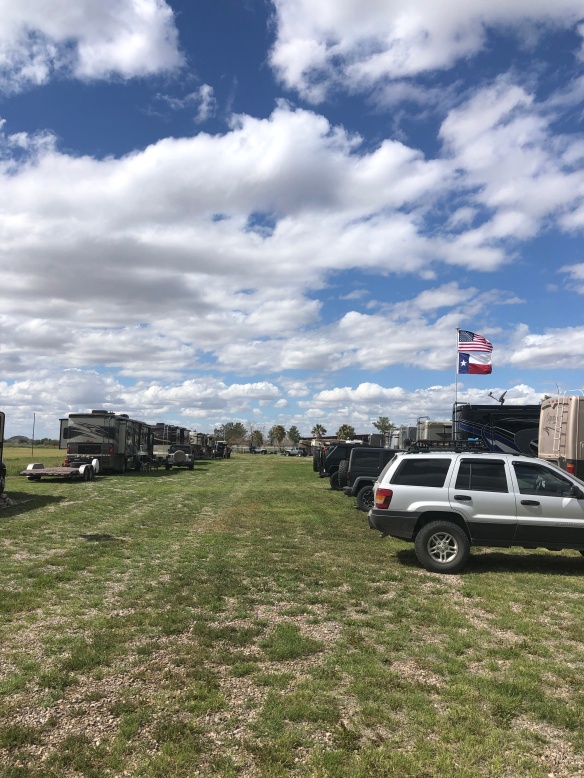 Every evening at “happy hour” the nacho ladies would greet us with complementary nachos and cheese after our ride, and this is where we would sign up for trails of varying difficulty for the following day.

Air-down. This, and airing -up are skills that we need to practice, We make a pretty slow pit crew, but we did get faster as the week progressed. 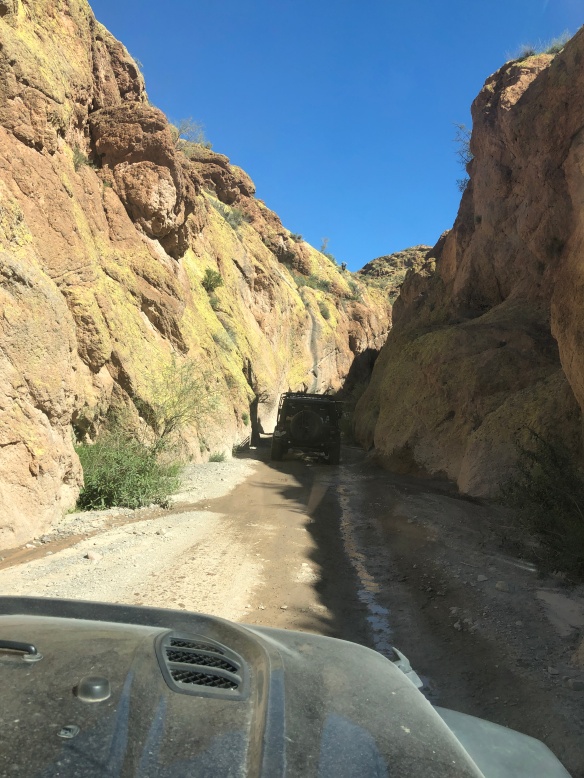 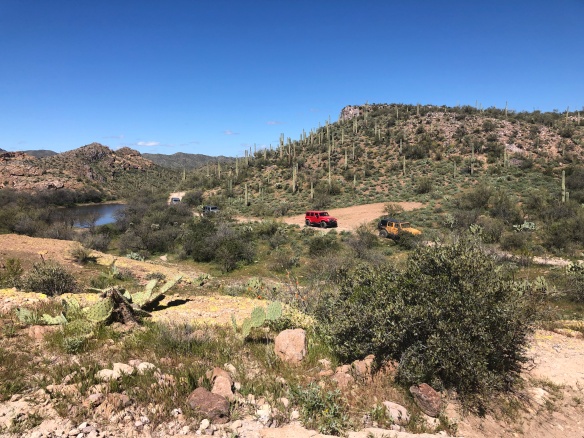 This was a tricky bit, but Steve handled it with no problem. 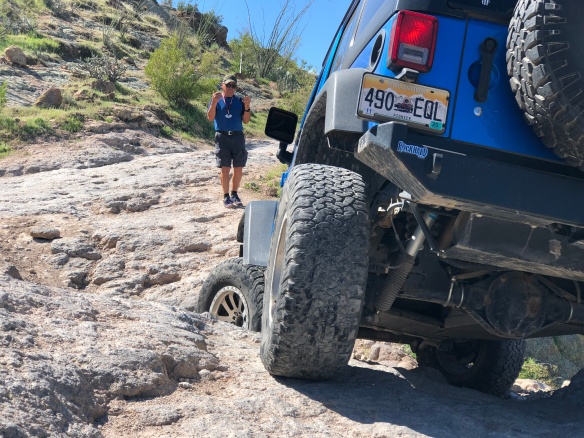 Every day we stopped for lunch and a chat. This was a pretty big group, about 17 Jeeps. Trails take a lot longer with this big  a group, having to wait for people to traverse the harder parts of the trail.

Coke Ovens at the end of our run of Box Canyon

The ovens were used to reduce mesquite wood to coke, a hotter burning fuel, for use in smelting gold and silver ore taken from surrounding mines.  The beehive-shaped stone coke ovens are each about 25 feet in diameter and 30 feet in height.  Each has a ground level entry and a few upper level vents.  The mesquite wood, burned slowly in the ovens for days, yielded the coke.  The new fuel was then transported directly across the Gila River to the community of Cochran (now a ghost town) and the smelters. 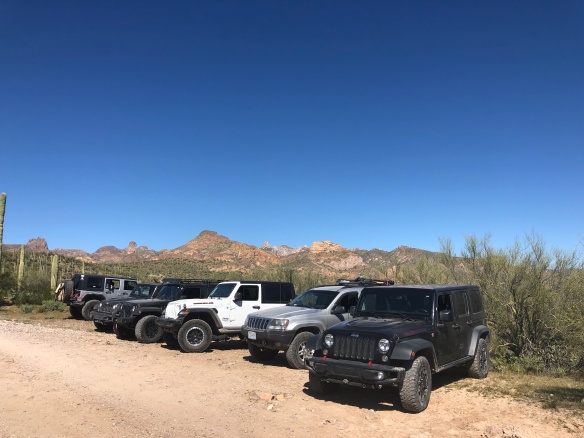 There was always a mine or two to explore.

For some unknown reason Chris decided to follow a strange man down this hole about 100 feet or more. 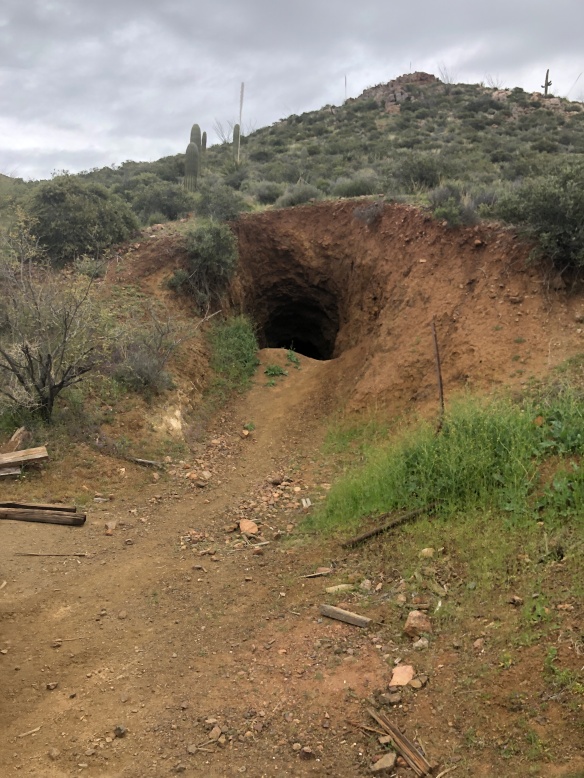 Every time she touched the wall it would crumble to the touch, and it was pitch black inside. 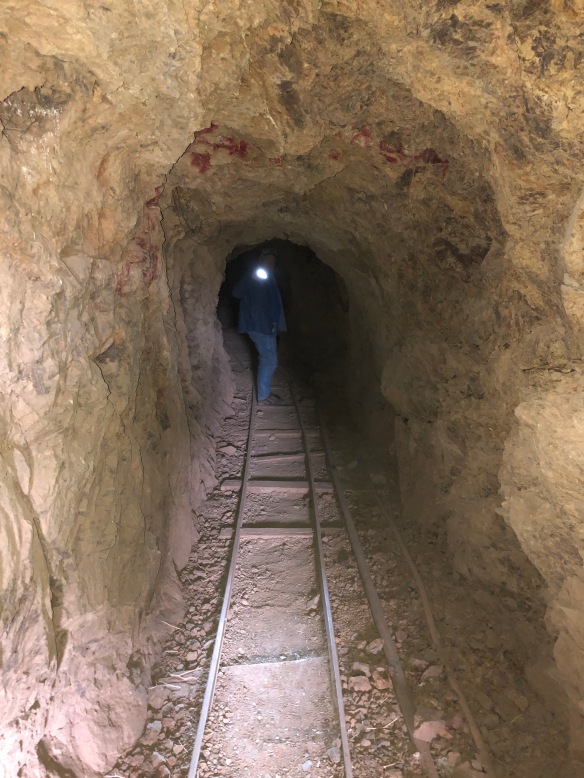 There were many primitive building still in existence, presumably used by the ore prospectors. 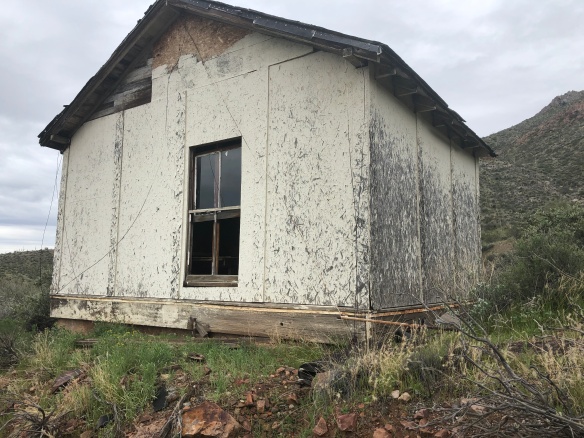 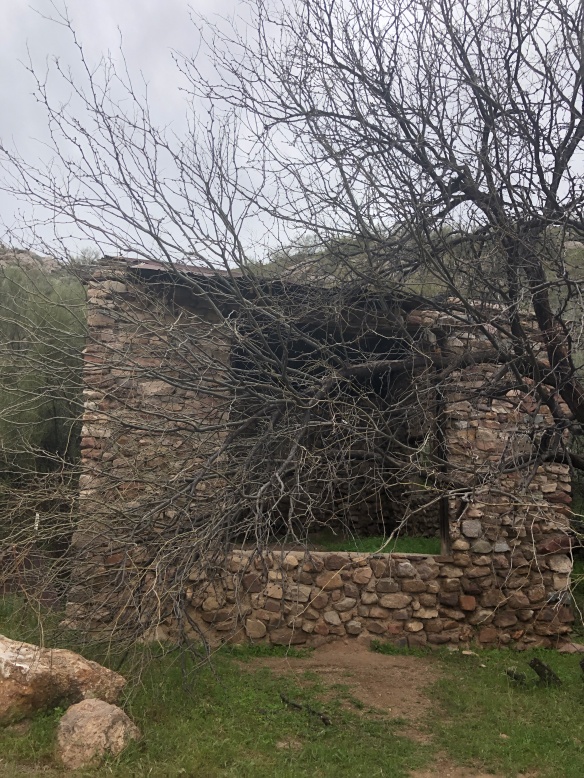 We took a day off from our Jeeping to visit the Casa Grande National Monument close by.

This is one of the oldest and largest structures  built in the 14th century by the Sonoran Desert people. It’s purpose remains unknown, but it was built with very primitive tools and it’s surrounded by an intricate system of canals. 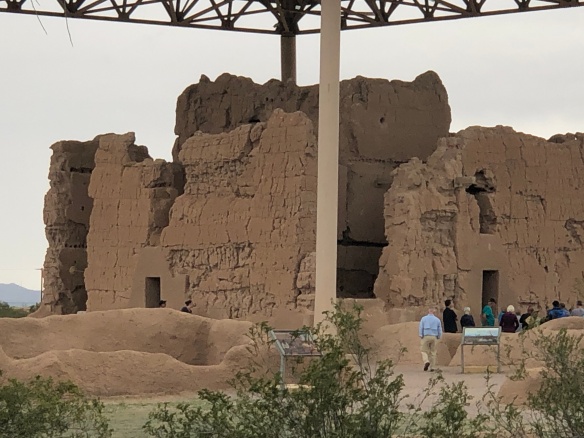 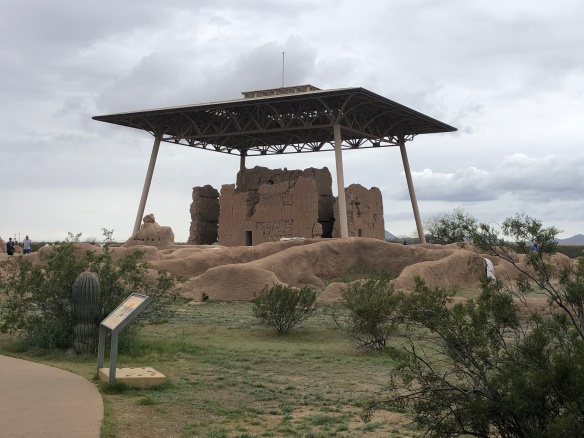 A little entertainment for happy hour, it seems some of our Jeepers are quite talented 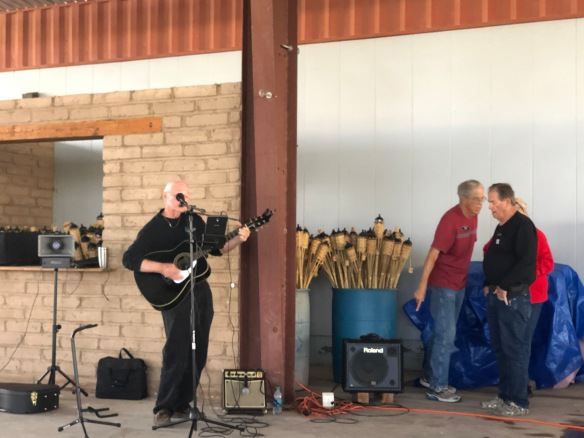 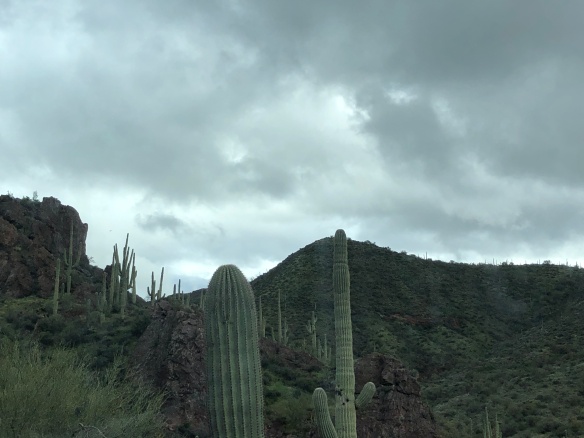 One day the weather took a bit of a turn, depending on which side of the mountain you were on. We experienced all 4 seasons in a few hours. 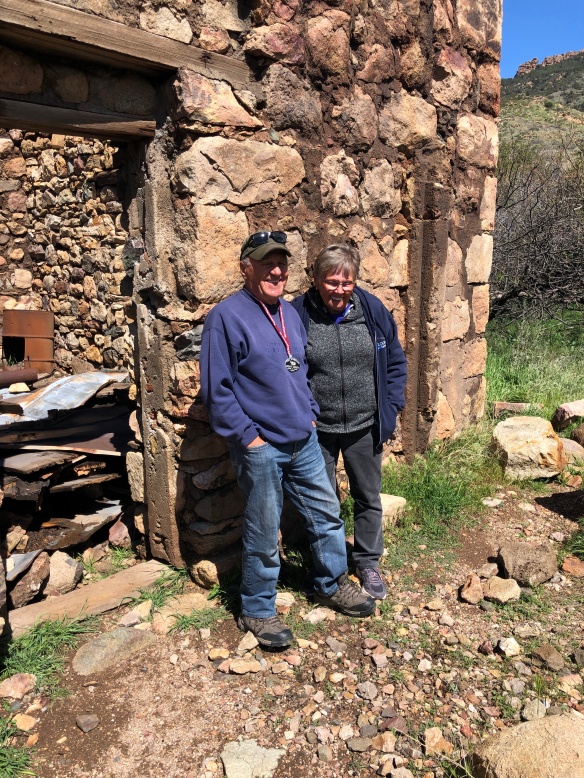 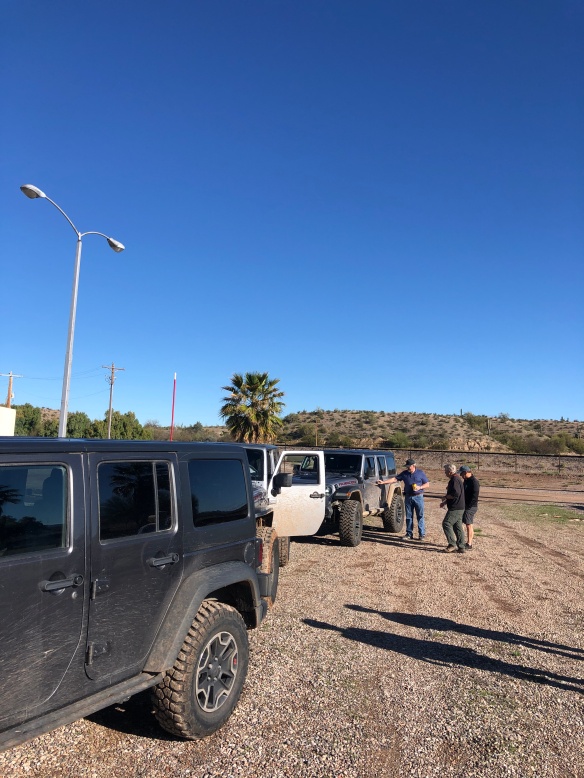 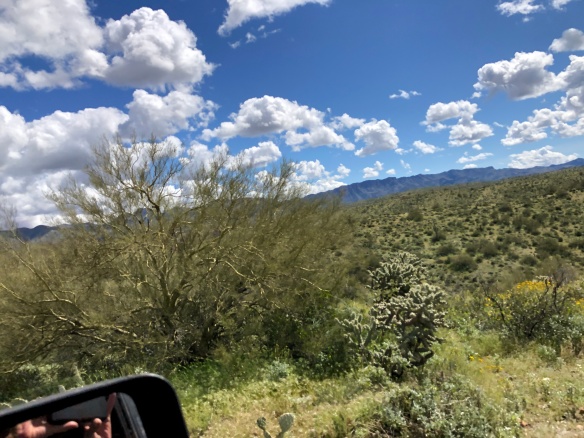 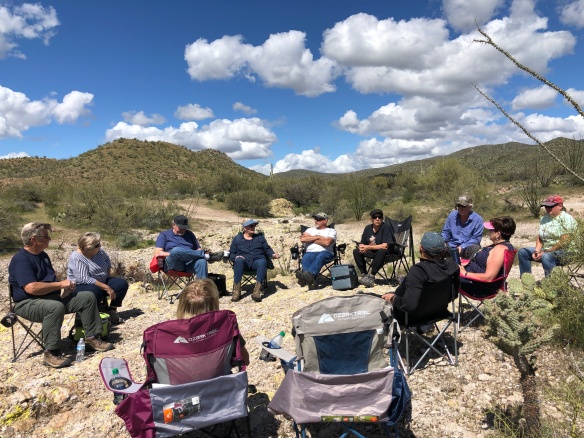 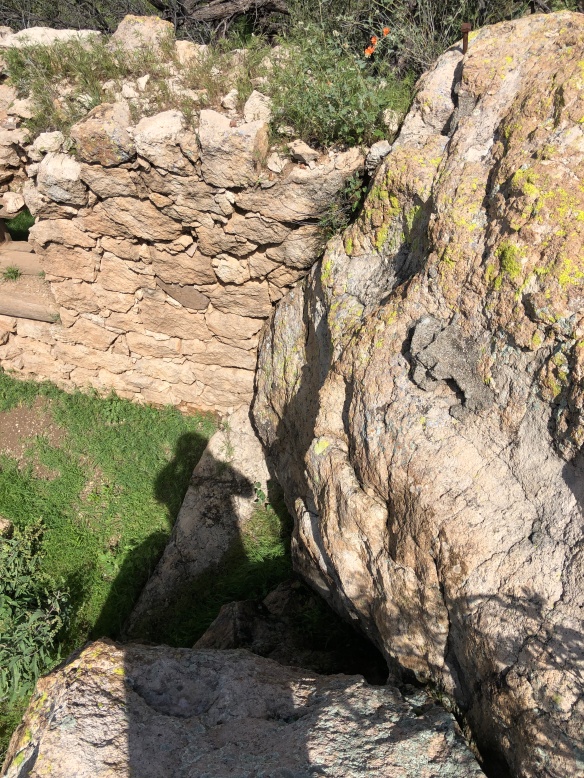 Prison as part of the Yuma prison relocation 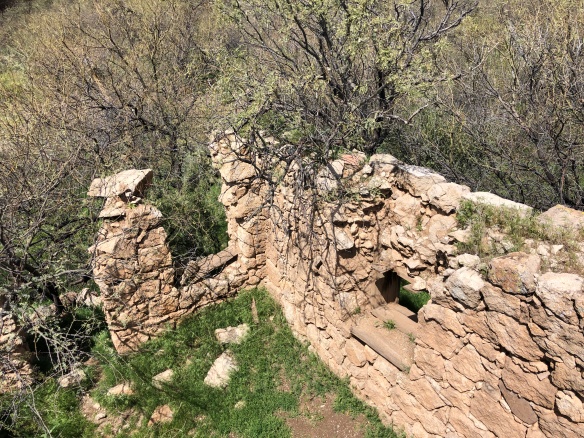 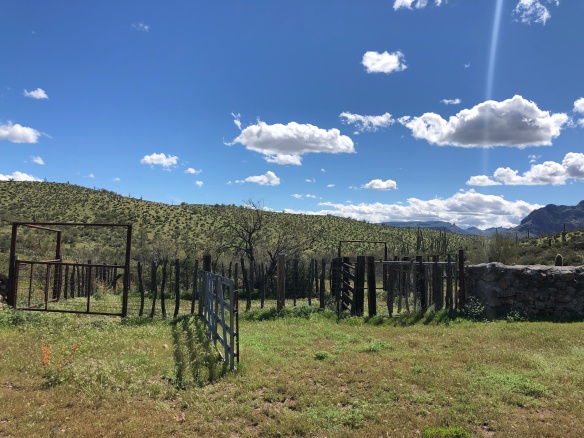 From Florence we drove back to Phoenix for our solar install. It was at this point when the corona-virus suddenly became a factor.