We left Pahrump NV. and headed back to Boulder Beach Campground on Lake Mead, driving SW through Enterprise about an hour, 60 miles, then past Las Vegas and down to the lakeWe were here 7 months ago, in March for 3 weeks then departed on our NW tour. We  traveled  to AZ, UT, WY, MT, then drove to  AB, BC, YK and finally Alaska. On the return we visited WA, OR and CA.

Steve had established a primary care doctor here from our stay in March, so in need of some prescription refills, time to see the Doc.  There’s also an RV doctor, National Indoor RV and the Jeep dealer where we bought our Jeep. So the perfect spot for restoration and repair for all. 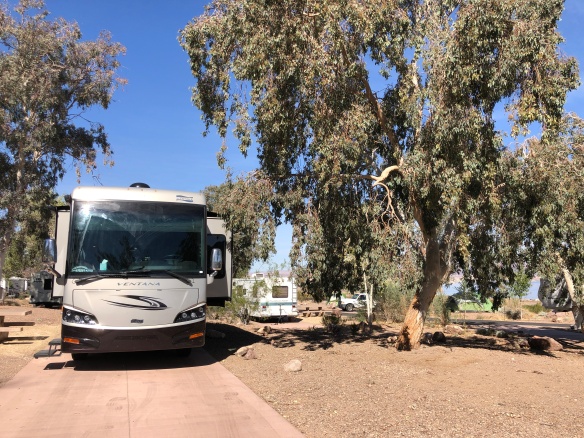 We visited most of the hot-spots last time we were here, but missed this one, the Red Rock Canyon, a few miles NW of Las Vegas. It’s a National Conservation area in the Mojave desert and known for its red sandstone peaks 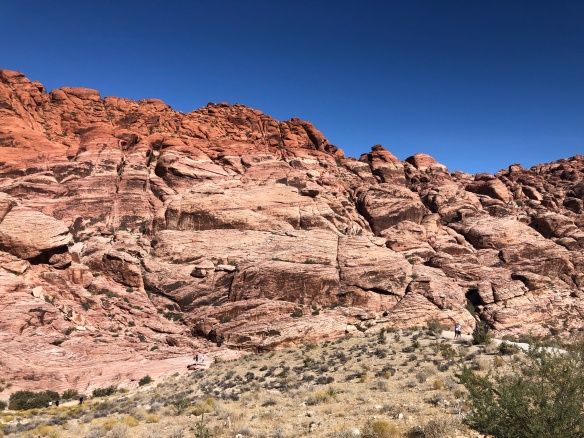 People hiking, climbing up and repelling down the red rocks.

We drove around the 13 mile scenic route

When we first arrived at the Boulder Beach campground we had to take a spot a couple of rows from the lake. It’s always a full house here, but mid-week people start to leave and the shuffling around starts. We had to wait a few days to get down there, but we finally got our front row spot, same as last visit with a nice unobstructed view of the lake.

The Park Service is currently expanding the park and should be double the size in a few months.

Apparently they were expecting an additional 10″ of water into the lake this year, but the bathtub ring still looked the same to us 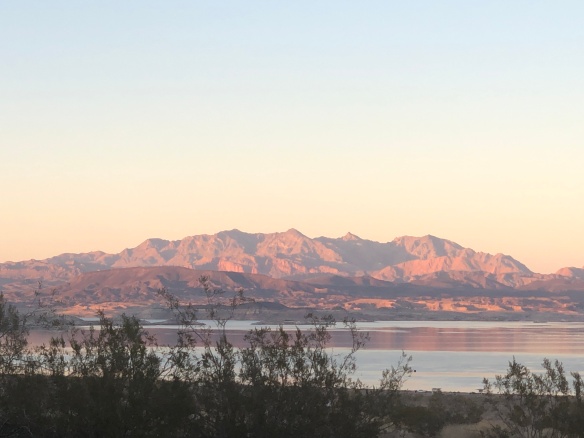 The Boulder City Golf course is one we’ve played before. 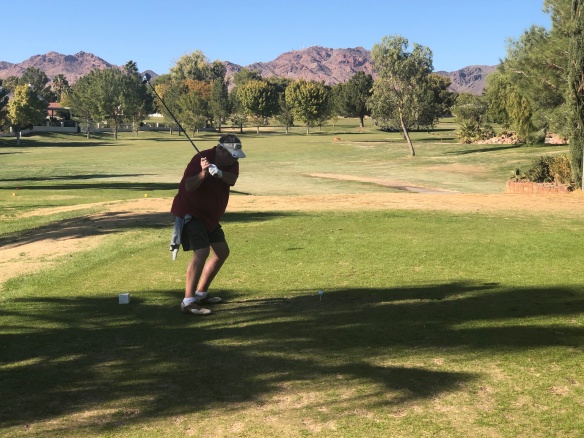 Finally this visit we got to see the long horned sheep, in fact we saw them almost every time we drove into town this time around. There are over 100 sheep in these herds who come down from the hills, sometimes through the nearby sub-division, but they are treasured by the locals. 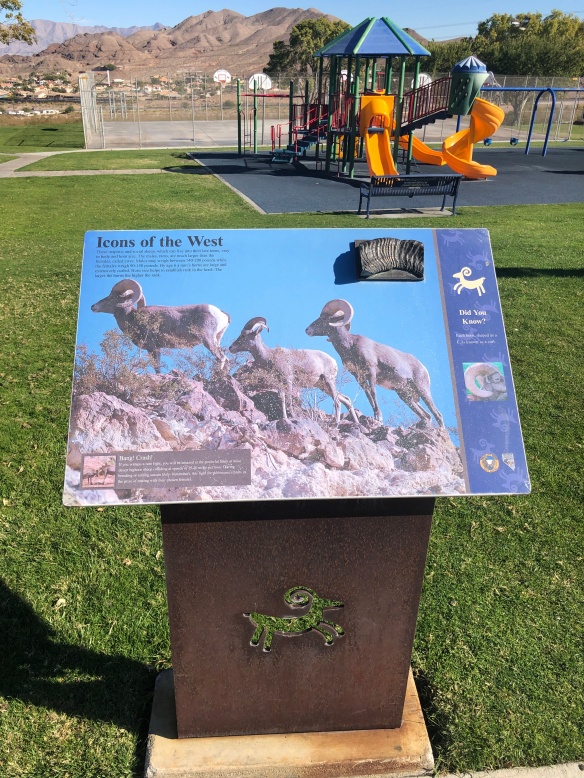 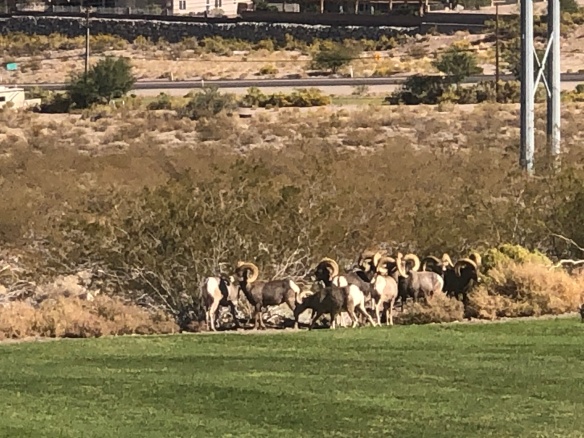 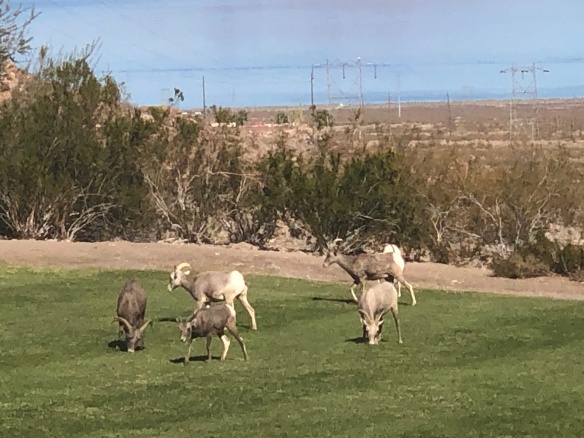 We took a drive to Willow Beach, a really popular spot and a few miles south of the Hoover Dam, and down a winding road which took us to the Colorado River. There’s not actually a beach here but a boat launch where kayakers were lined up ready to take the plunge. 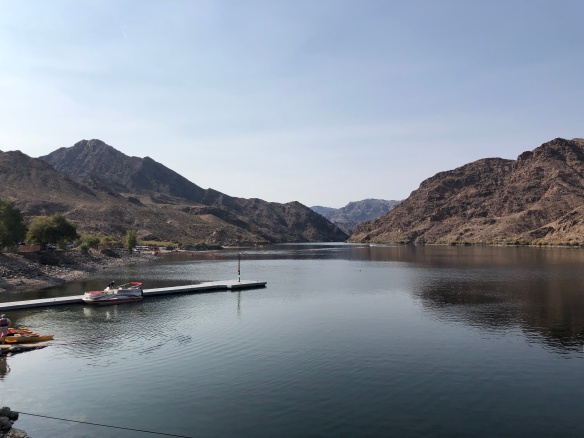 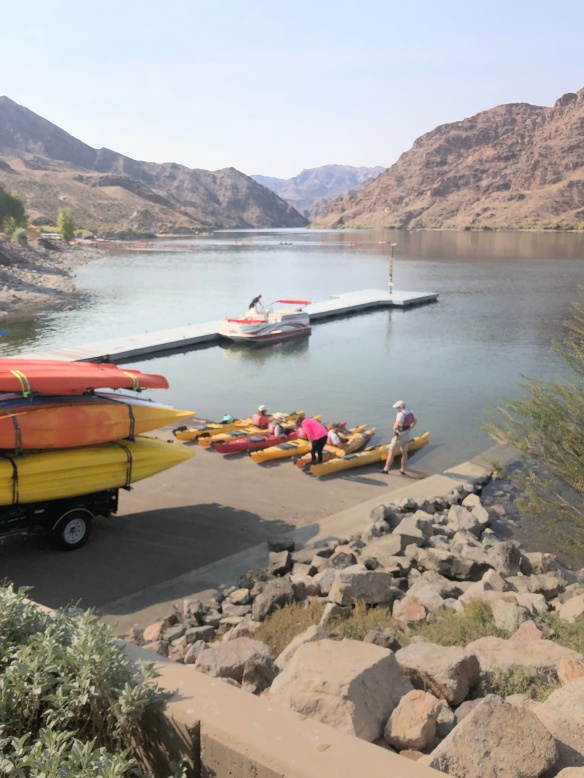 Next stop,  just a little further south on Rte 95 was the turn-off for Temple Bar Marina. It was another 26 miles down the road, that they refer to as their driveway, before we reached the marina.

Temple Bar is known for the massive rock formation which reminded early Mormon settlers of a temple and for its 20 mile long unobstructed water-ski runs. (This is the east side of Lake Mead) 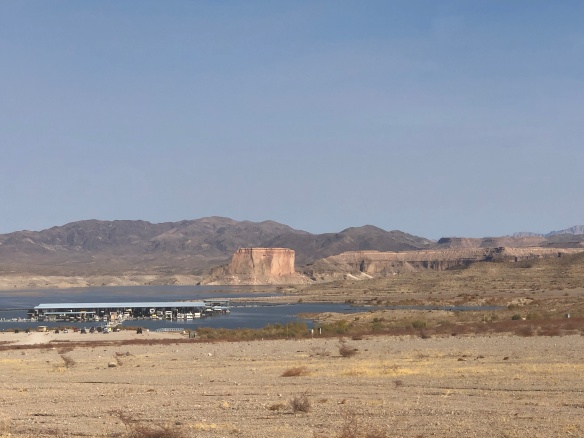 We were concerned about the coach generator and batteries. At this point we’d been dry camping for 3 weeks and the generator was making weird noises and shutting on and off intermittently, so we brought her to National Indoor RV Center here in North Las Vegas, as they installed the new batteries last March. They were 4 – 6 weeks out for service appointments, but they fit us in to check it out. The batteries were fine, but they said what we expected that the generator was not right. They also stated they were not authorized to work in Onan generators, so we contacted Freightliner as we had it services at First Truck in Abbotsford BC back in September. They informed us we needed to contact Cummins, so a call to Cummins was next.

Next was the Jeep which had a couple of issues, but all were covered under warranty. YEAH!!!

While we were at NIRVC, our first stop for the coach, Steve noticed a familiar coach parked 3 coaches away, The RVGeeks had stored their coach while they were in Italy and they were still there when we arrived. They were going to leave this day in prep for  The RVers TV show launch viewing party in Fredricksburg TX on Sunday 11/17 on The Discovery channel.

All checking done we then took advantage of the coach washing service they have here. Cha-ching!! There goes another $150, worth it though as we only get it cleaned every 4 months, and these guys are good

Coach getting a bath!!

We got an appointment with Cummins 4 days out, so back to the campground then up to Cummins, which was just around the corner from NIRVC 😦

Another night in a service shop parking lot 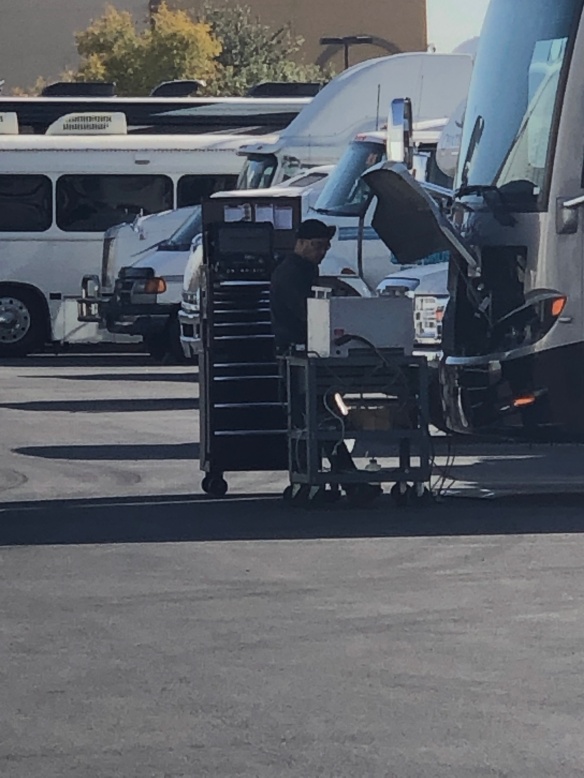 So after 4 weeks at Lake Mead we can leave, everyone feeling good. Doctor told Chris she was healthy as a horse, Steve’s doing well and has a new cardiologist. We got our flu shots so ready to head further south and beat the cold weather coming in.