Leaving Colusa we drove toward Yuba City and Sutter, both towns extremely rich in agriculture. Since the 1890’s they’ve been growing fruits and vegetables, rice and nuts here. This area has a long growing season with an abundance of rain in the winter. We passed the walnut and almond trees, then the plums, rice, beans, melon, alfalfa grapes and finally in the center of Yuba City, the Sunsweet dried fruit processing plant.  (We would ask the growers to please put an identifying picture at the corner of the fields to make it simpler for the passers by to identify)

We then took Rte 20 NE through the Tahoe National Forest which was very picturesque until we saw snow and ice on the sides of the road. This was a very narrow, windy road so were glad to see the signs for I-80 appear.

Just before Reno we drove over the Donner Pass, a mountain pass in the Northern Sierras above Donner Lake, also a big ski area, but named for the ill-fated Donner Party who became trapped here in 1847

We stopped over night at Boca Rest Reservoir, but Steve was not “feeling it.” We did watch an eagle soaring through the skies capturing and eating dinner which was a thrill

We then headed down to Washoe Lake State Park just south of Reno and 5 miles north of Carson City NV. This was a nice state park with rolling hills, a lake and wild horses roaming around. 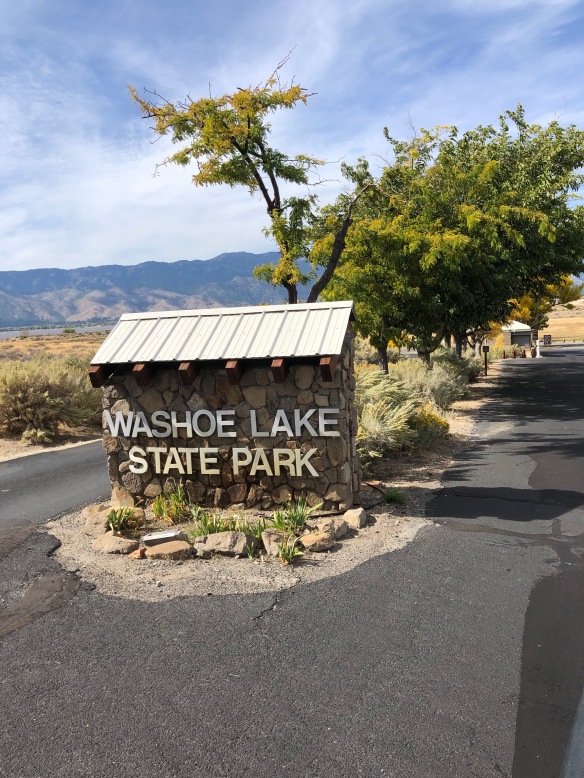 We managed to grab a prime pull-through site facing the lake and mountains, with a gazebo no less. We had electric and water hook ups and for $25 that was OK 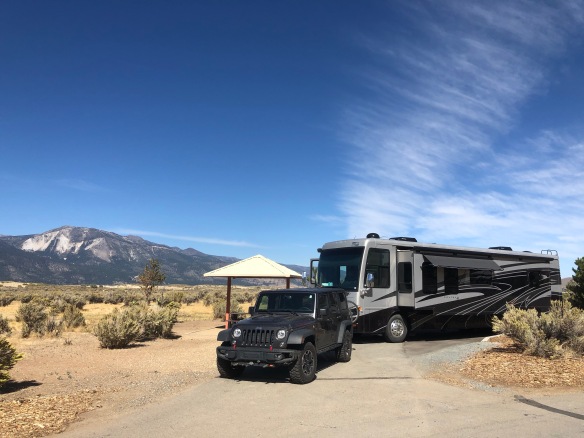 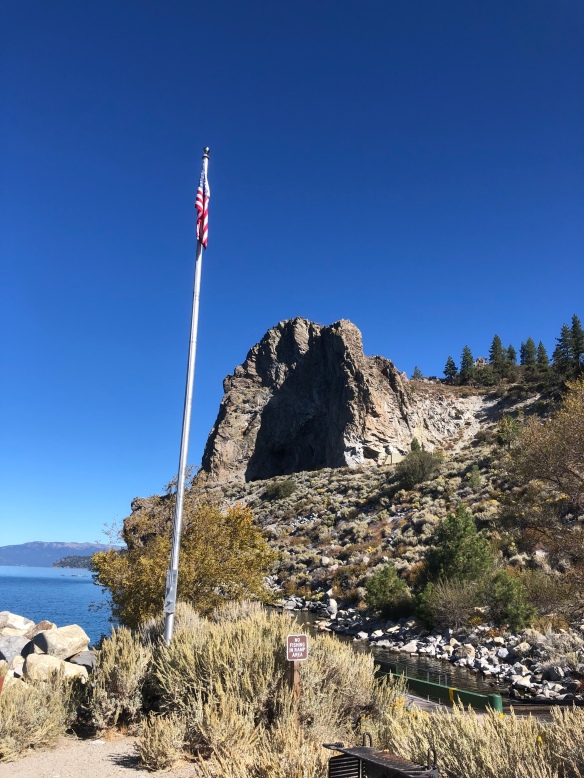 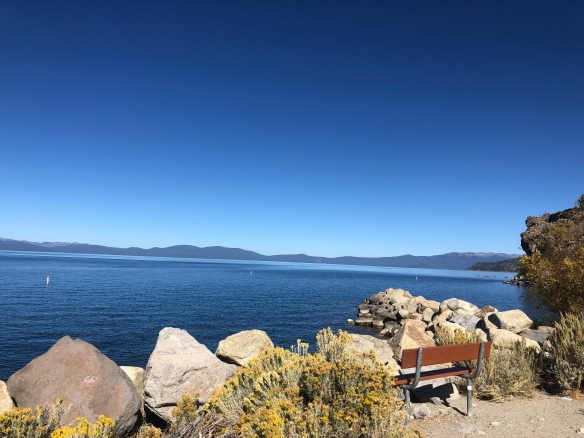 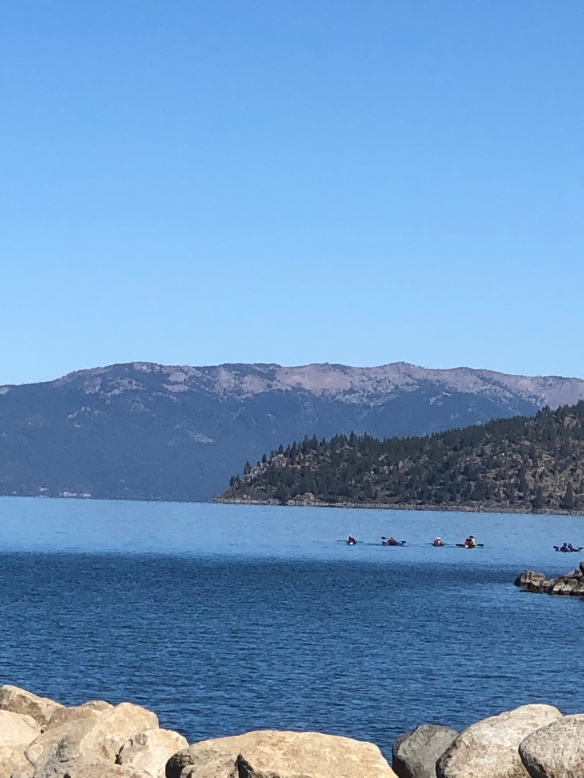 I think the whole of Tahoe was heading here, long line of cars to get in and a long walk after parking. There were also long lines to get tickets to eat and drink.

Must be a large German population here, many were dressed for the occasion and walking about with their steins 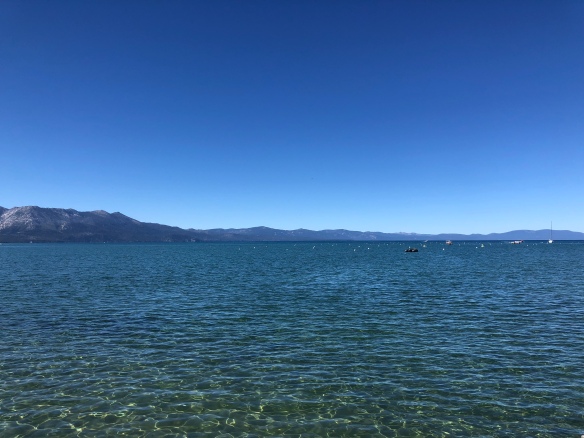 We stopped for lunch at a restaurant , the Boathouse on the Pier, delicious 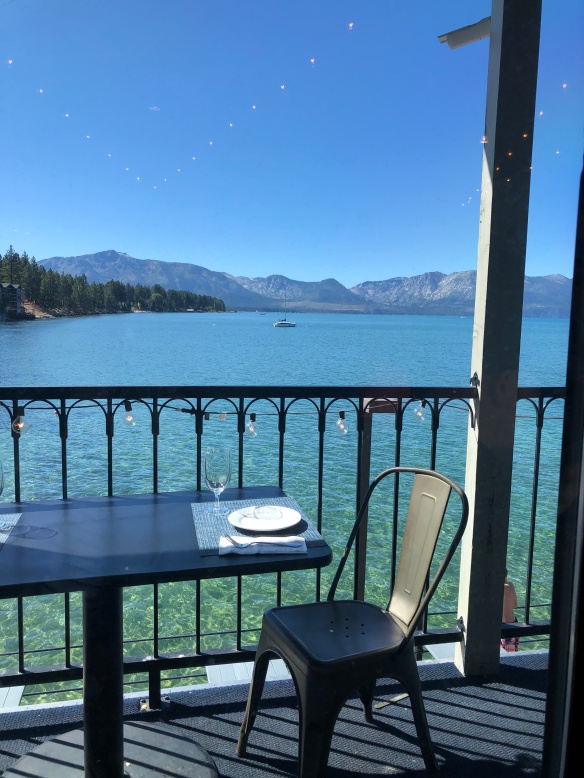 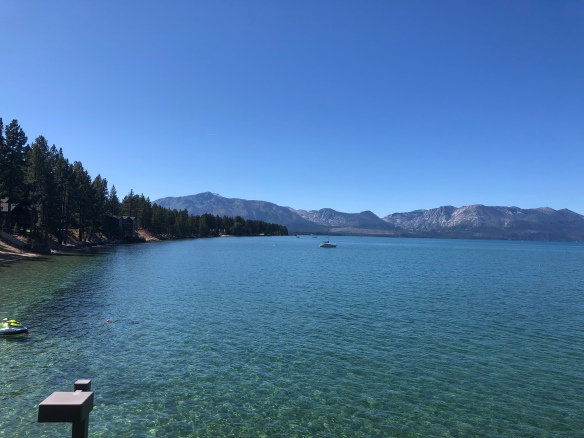 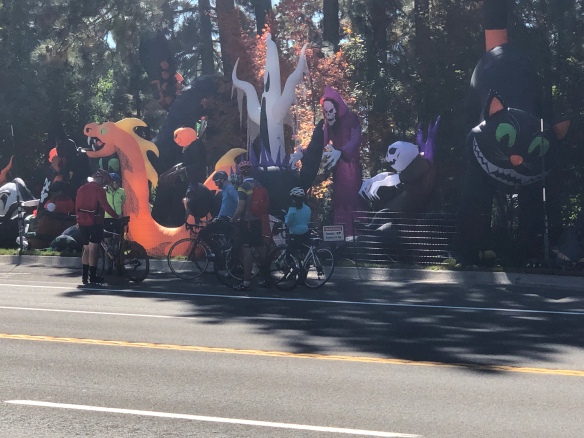 Back to our lovely wild horses at the campground. They were never far away, it was a great spot for them 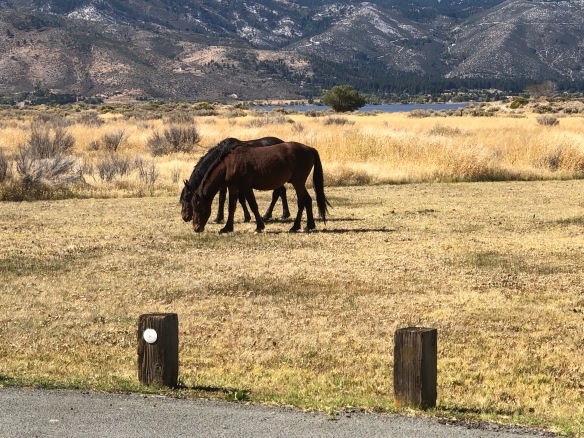 This area came as a surprise. encompassing Virginia City and a vast history of gold and silver mining. More than $500M of silver and gold were produced in the area and virtually ended the California Goldrush.

The Comstock Lode was one of the most important discoveries in US history, a lode of sliver discovered in the slopes of Mount Davidson the land partly owned by Harry Comstock

We arrived on a day when they were celebrating the Outhouse Races a 2-day event and taken quite seriously. 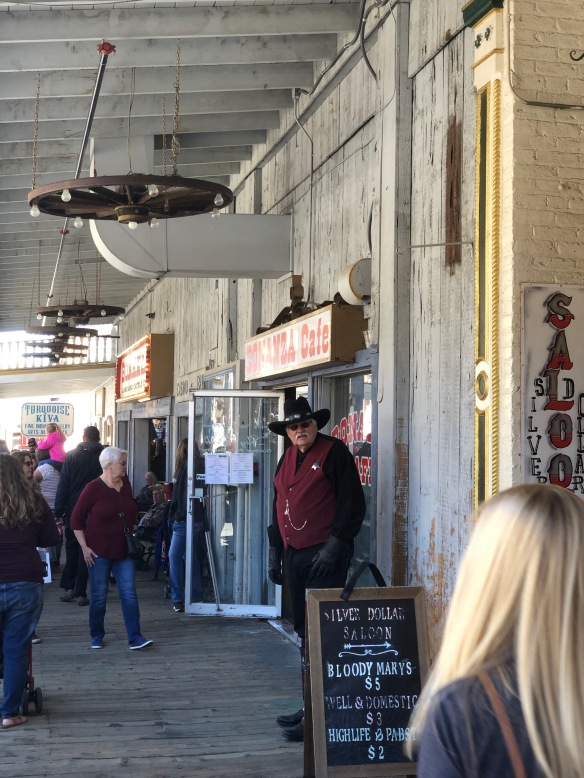 It started off very calmly

Then things started to heat up

This was pretty hair-raising, but we had to descend somewhere. It was steep! 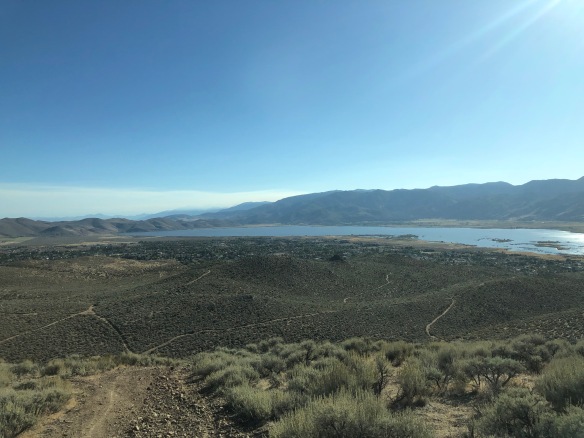 Another day we drove into Reno and sampled a delightful Korean restaurant. Araria

Downtown Reno has grown substantially over the years. Still the same old downtown, but now surrounded by skyscrapers 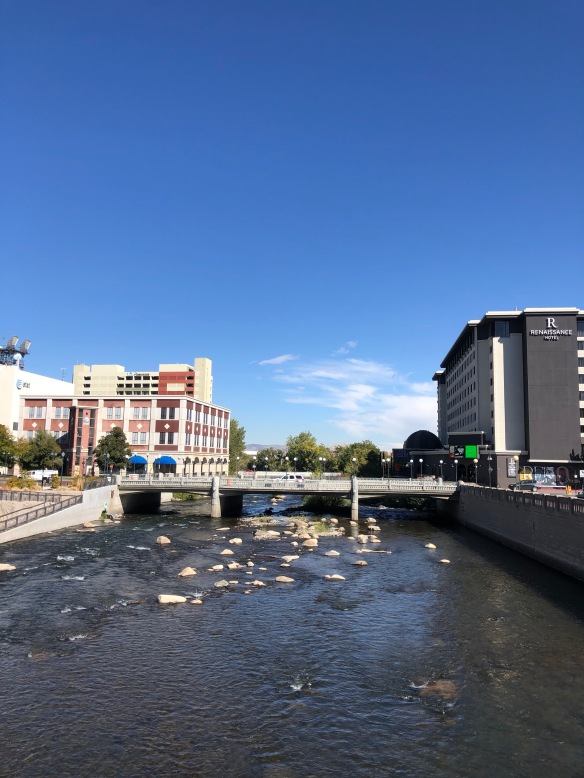 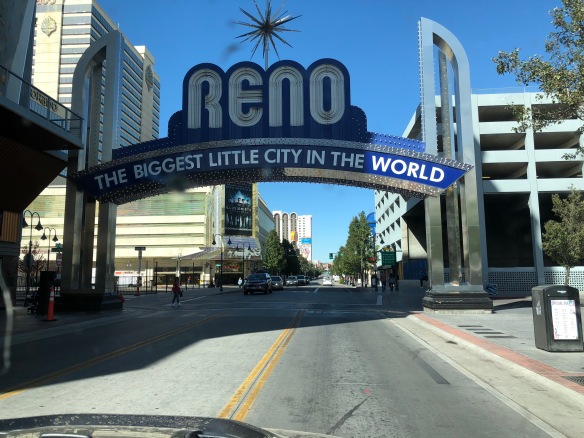 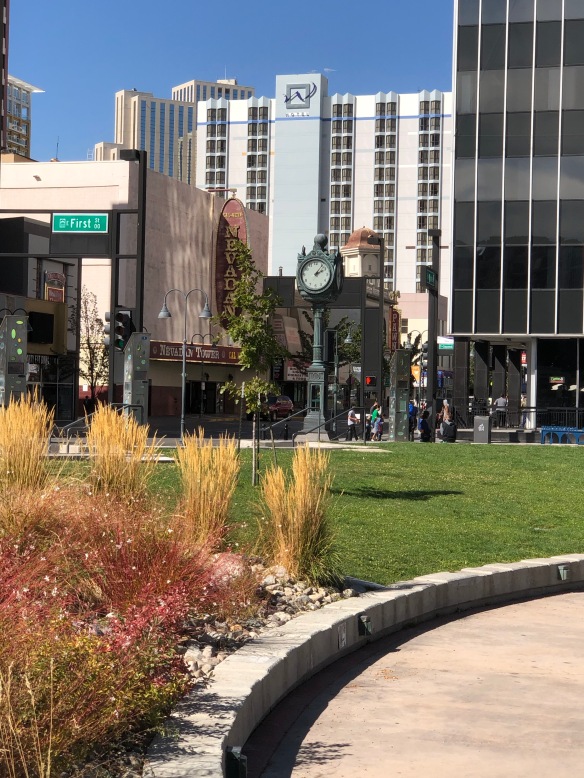 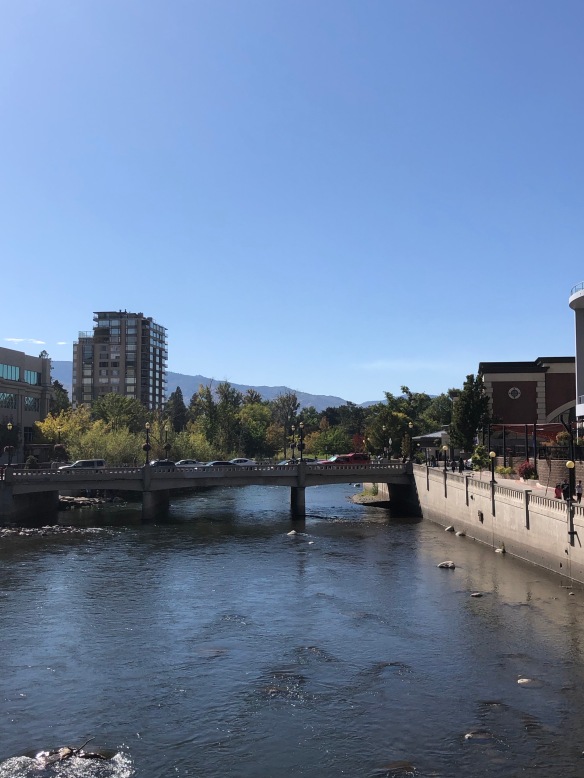 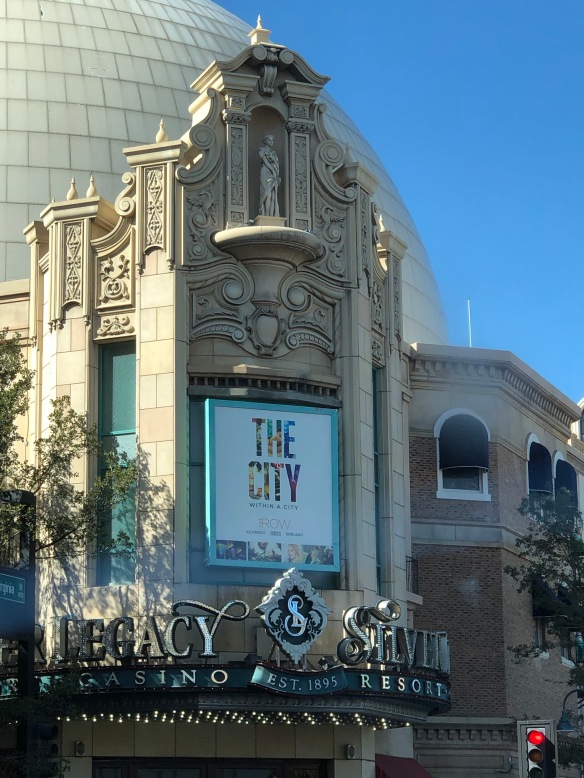 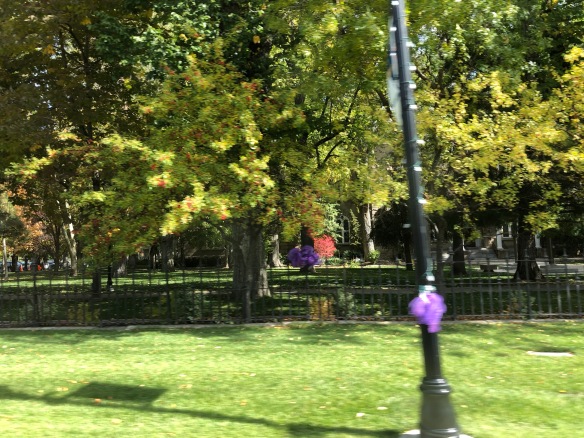 After 5 days of touring around and relaxing in our lovely site, it was time to move on to Yosemite National park while it was still sunny and the roads were still open. At this time of year, end of September, many of the campgrounds are closing so time to get a move on while we still have a chance.