We left our woody mountain spot in the Mount Hood area and headed toward Portland, west about 90 minutes. We had selected a campground in the dubious sounding town of Boring OR. and Barton Park. This was a county park about 40 minutes south east of Portland. It was difficult getting into the park as it was emptying out after the Labor Day weekend. In any event once we settled in we looked around and there were maybe 6 spots occupied and we were in site 94 with no-one around us

We took a drive to the Columbia River Gorge National Scenic Area. This was about 70 miles west of The Dalles, the part of the river we’d stayed at the week before 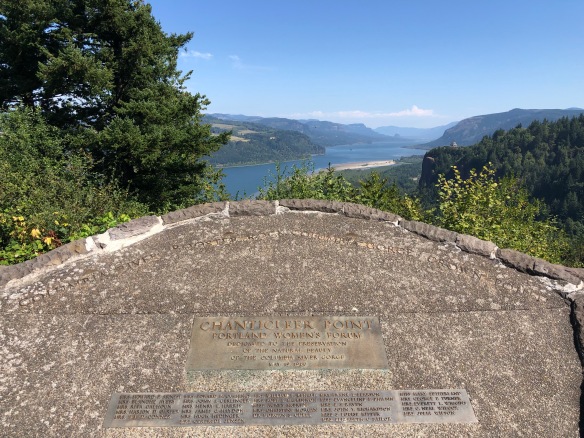 Washington on the other side of the Columbia river 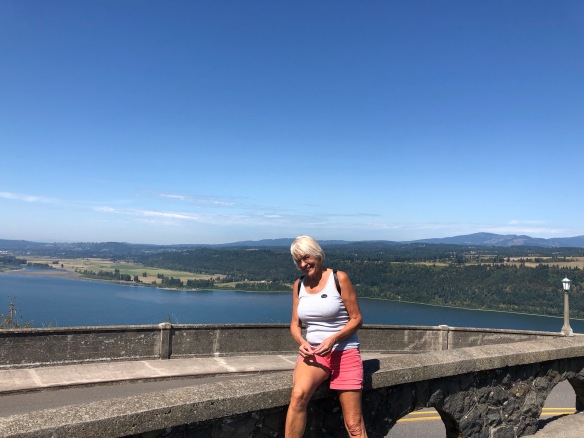 We did quite a bit of hiking that day, but it was well worth it although Steve didn’t think so at the time 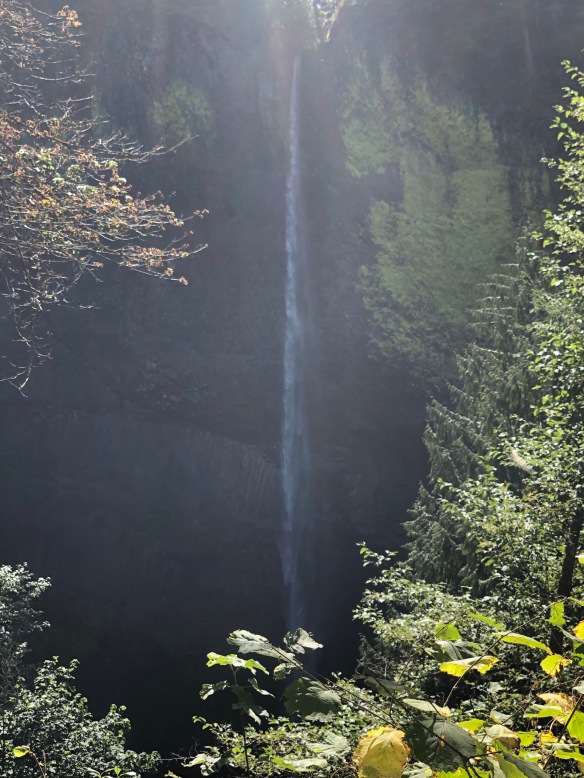 Back in Boring everyone was enjoying the food specials at the Carver Hanger.

We picked up our mail in Boring, Steve renewed his passport and we found the Plaid Pantry where Steve had Amazon deliver his shopping packages at one of their lock-boxes, it worked well. 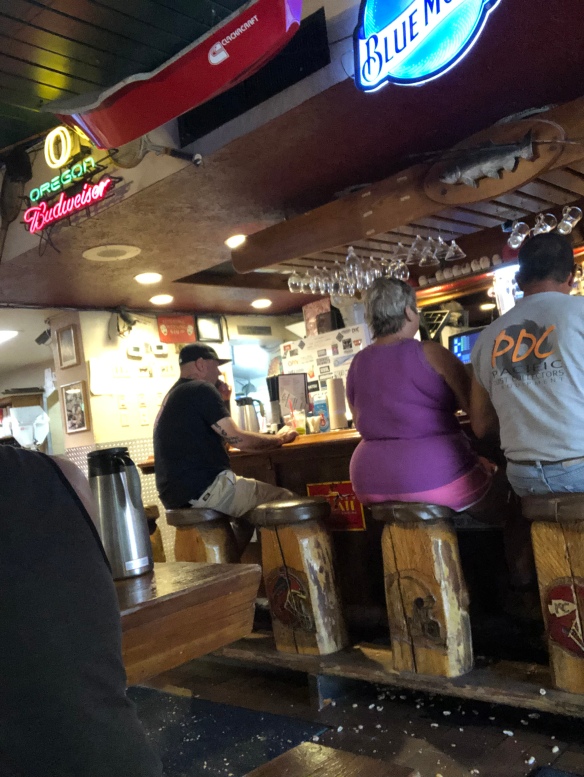 On day 2 we decided to ditch the Jeep and take public transport into Portland. Portland is the largest city in Oregon but not having been before, and hearing that Portland has the simplest transit system to understand in the country,  we decided this was the thing to do.

We left Gresham station at the end of the line and it looked good, until the first eccentric character boarded the train, swearing , cursing and bothering all the passengers, “we’re back in NY”

There are no ticket sellers or collectors for the fare, you can pay your fee at one of the machines, but I wonder how many people do, we didn’t see anyone.

We opted to leave the train at Pioneer Square, that being the only place we knew from protest fame,  since the 1960’s Portland has been noted for it’s progressive, political values and counter-culture, so what would we find?

Off to the Visitors Center to find out 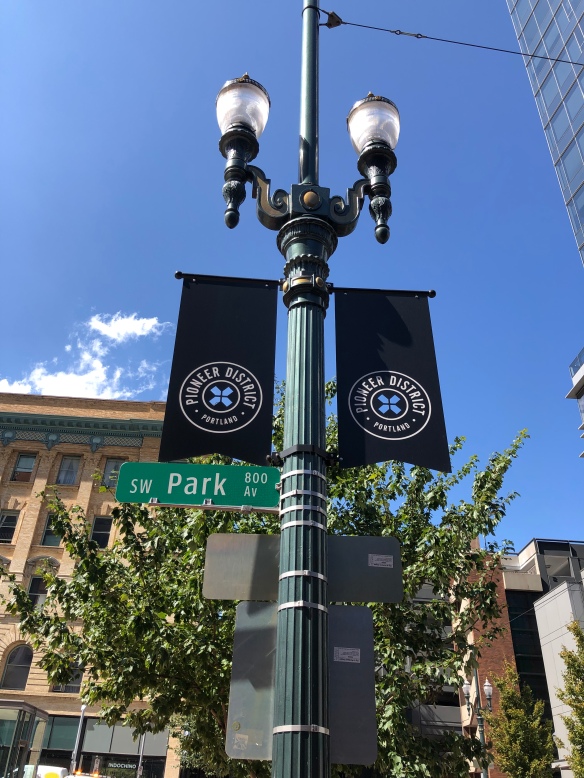 We weren’t given too many clues as to the fascination this city has for so many nor the reputation it has, to be honest we weren’t sure what we looking for. All we knew was it’s a very unique, eclectic city, full of micro-breweries and coffee houses. All we got from the visitors center was go to Powell Books, biggest book shop in the world, keep in mind that Chris is still getting over selling the 300 books she once had, the places to go for “happy hour” Steve doesn’t drink, and the Chinese Gardens, which were closed for a private event.

We did find a good pizza place adjacent to the book store, but then it went downhill. All we saw were the homeless, they were on every block and the smell of pee was horrendous.

We were in the Pearl district, maybe the wrong area, but we had no idea. Maybe it’s the nightlife and restaurants that make this city so popular, don’t know

We asked so many people in a 1 block radius how to find a train/bus anything to take us out of the city and everyone told us to go right, then left it’s on the corner, even the cigarette smoking transit ambassador on the corner sent us around the block again.

We eventually got out of there and to home sweet home, but we were so puzzled, and had the feeling that we’d completely missed something. It probably makes a difference to spend time in the evening there and try one of Portland’s renowned restaurants, instead we ate at the equally renowned food trucks which were really good

One of the reasons we came here was to meet up with Chris’s friends who she met in NY when she first arrived in the US 40 years ago.

Who knew they would look exactly the same and boy did it feel good. We had a fabulous evening of reminiscing on Herbie and Susan’s back deck, what a great setting

Michael and Herbie (our host)

The Portland Saturday Market was not to be missed, so back on the train the next day, we ventured into the city 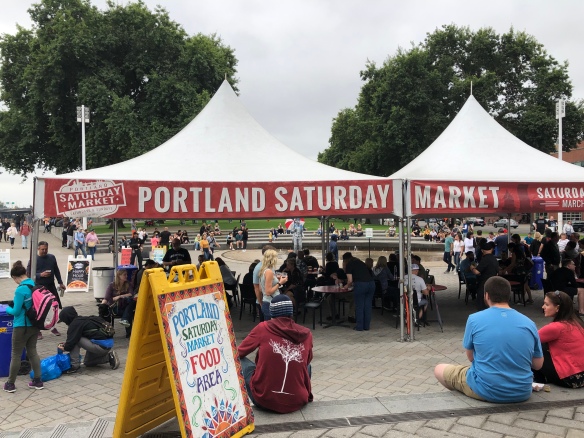 And of course, food everywhere, this was an elephants ear, a large flat donut covered in chocolate and cream

The area around Portland is beautiful, lush, green and more than made up for the disappointing city visit. This was our first introduction to the friendliness and warmth of the Oregonians and I’m sure we’ll try again another time but now it’s time to move west and explore the coast.