We headed back North toward Anchorage as the smoke was too much for Steve to handle, and decided to stop on the way for a wildlife “fix” at the Wildlife Conservation Center, a sanctuary for orphaned and injured animals. 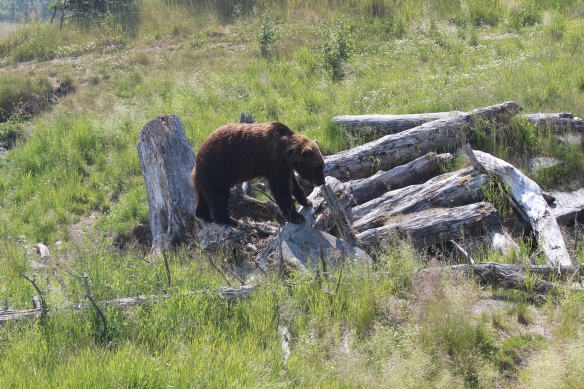 We stopped in Anchorage overnight at Cabela’s again, then headed toward Palmer and the Mat-su valley. We spent the 4th July at Matsuatna RV park, surrounded by lakes The air was much clearer here and Steve was beginning to recover, so we relaxed here for a few days, keeping our eyes on the fires reports. Fires were popping up all over the place accept south, trouble is in these parts there are so few roads, we had to drive north to eventually go south.

We were about 1/2 mile from the local airport and planes would fly really low over these trees. They actually had scheduled flights from here to local towns as well as sightseeing tours over the Wrangelli mountains

We joined the festivities at the Friday Fling, for a little music and food

Also had a meal at the local restaurant. It was hot day and no-one has air-conditioning up here, so it was a tad warm 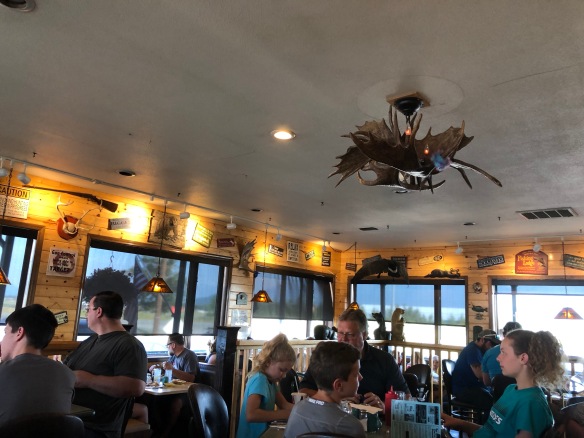 We drove over to Ekluntna about 20 miles away and met up with bloggers Pau Hana Travels, Gary and Stacey who had organized a gathering of their RVing To Alaska  followers. (forgot to take photos though)

This a view of the Matsuatra glacier 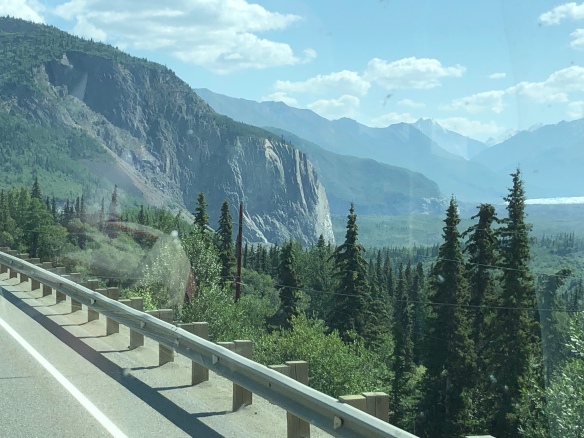 We left the Mat-su Valley and drove toward Tok with a stop-over in Glennallen, the “Hub of Alaska” where the crossroads take you to Valdez, Anchorage, Fairbanks and Tok. We thought about driving to Valldez but it’s proximity to Seward would be too close to the fires.

This little campground in Glennallen, Dry Creek was perfect. Each of these sites had a separate patio area with picnic table and fire-pit and really nicely landscaped, not bad for $9. There were other campers there when we arrived, but left the following day, so we had the whole place to ourselves

Another airport right over the trees, which didn’t concern this moose too much

We had a great lunch and the Thai food stand, best food in town, and met a guy there from Lake Placid NY, a retired police superintendent. He had traveled to Alaska 20 times, traveled the world, and was organizing a kayak expedition from Valdez to Seward, approx. 90 miles. Neither of us jumped at the opportunity.

Planes and helicopters are everywhere, even Juneau, Canada’s capitol cannot be reached by road, either ‘plane , boat or you’re born there.

On the way to the Yukon heading south on the Alaska Highway the road took a turn for the worse, and we put up with mud, gravel and construction for many miles

This means more dings in the windsheild

Finally after 4 hours we arrived in Tok, and decided to take the coach and Jeep for another bath. Feeling exhausted after that exercise we drove another 2 hours to Northway and Deadman Lake Campgrond. The campground was down a 1 mile long gravel road and when we arrived the coach and Jeep was filthy again.

We met an Irish lady while there who was cycling the Alaska highway at 100 miles a day, but was also suffering from too much smoke inhalation.

We barlely left the coach that evening as the smoke was getting so bad, which was a shame as this campground were offering canoes and life jackets free of charge.