(Just after 4th July weekend, our journey came to an abrupt halt when Steve was admitted to hospital in McCall ID. Consequently our blog took a back seat for a while  and now trying to catch up.)

While we were in Twin Falls the parts for the coach arrived and Steve was able to fix the latch, just the hinge left to go and Bish’s in Boise would be repairing that in 2 weeks. In the meantime we left Twin Falls to head north and a couple of  Harvest Host stops.   First stop was Kraay’s Market and Garden about 90 minutes north in Bellevue. We were a wee bit skeptical of this one as although our hosts offer free accommodation, usually a field to park in, they expect in return a purchase of whatever they produce, fair enough. In this case though, we had to sign a “code of conduct” and agree to make a purchase, and the itemized price list was presented to us as soon as we arrived. 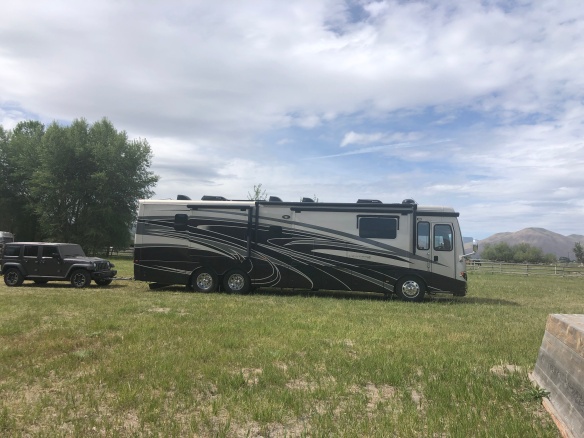 We were shown into the field where we found an Airstream with 2 obviously confused travelers.  Could it have been that on the list were pork sausages and lamb cuts, but no sign of pigs or sheep as this, it turned out,  was an Arabian horse farm and they were selling us frozen eggs at $8 a dozen and really overpriced meat.

We  parked 50’ away from our neighbors and agreed to meet up in the evening. That’s when Mrs owner waltzes up and tells us we can’t park any where near these people, that even though they don’t mind us parking where we are, they probably do, but just won’t say and besides they’ve provided an area of 5 acres in which to park. We should have left then, but we were miles from anywhere and it was getting late, it’s only one night after all.

Next morning we were invited to their greenhouses to pick what we wanted. Unfortunately we couldn’t identify the crops when suddenly the host husband arrived and introduced us to the kale, cucumbers, peppers etc… We took a couple of items and were expected to make a donation, then we bought the dozen eggs and sausage, I believe the total came to $20 and we were on our way. 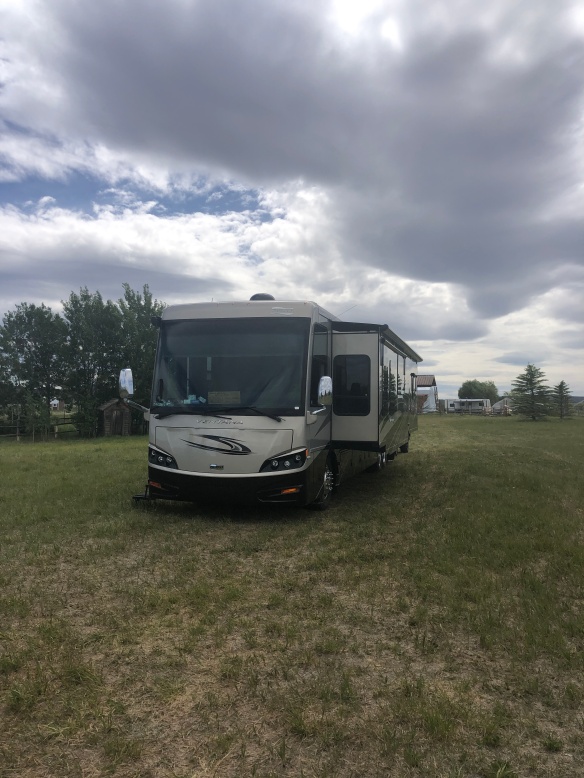 Our next stop was in Glenn’s Ferry about 90 minutes south west and another Harvest Host called the Y Knot Winery,  a very different experience.

They not only had sites for Harvest Host members but also a 14 site RV Park. Harvest Host members were given spots in the parking lot for the under 30’ and for us larger rigs we were shown to one of 7 pull through sItes in Chardonnay Place the other side of the vineyards, all dry camping. So we stayed in the Harvest Host pull through until our site in the RV park was available the following day where electric and water were on each site. They even had a 9 hole golf course which wrapped around the vineyards and of course a delightful restaurant that was open all day.

All too good to be true and so different from the night before.

And then suddenly, without any warning at 95 degrees, the front AC  stopped working. 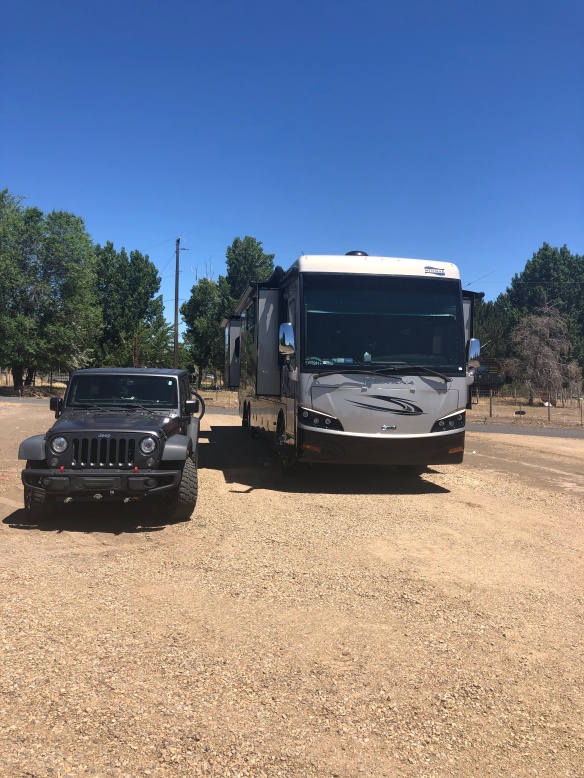 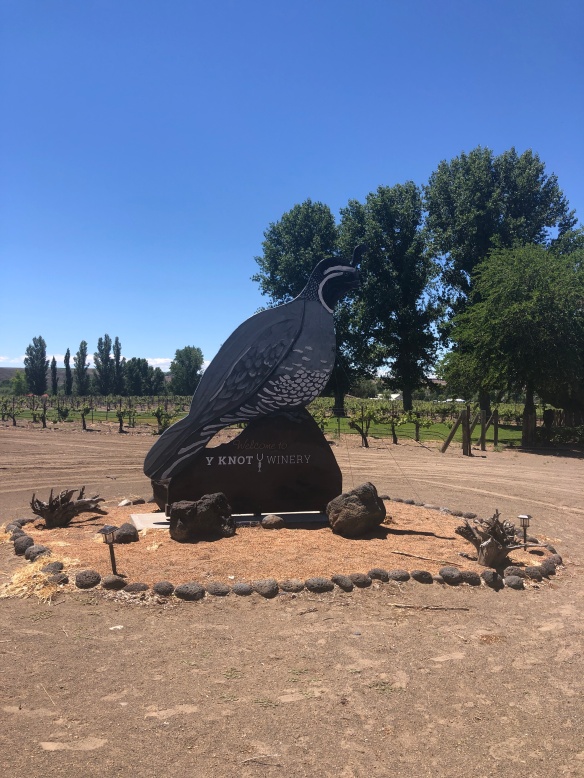 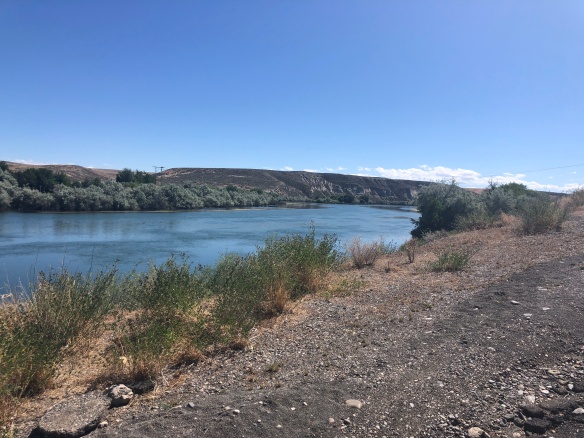 We met some really nice people, Derek and Kathy from California and Youtube Vlog “Always Enroute”, who we had dinner with, and enjoyed the weekend entertainment, the guy was pretty good too.

We’re putting on very brave faces here, the wine helped, knowing we were returning to Dante’s Inferno in the parking lot. 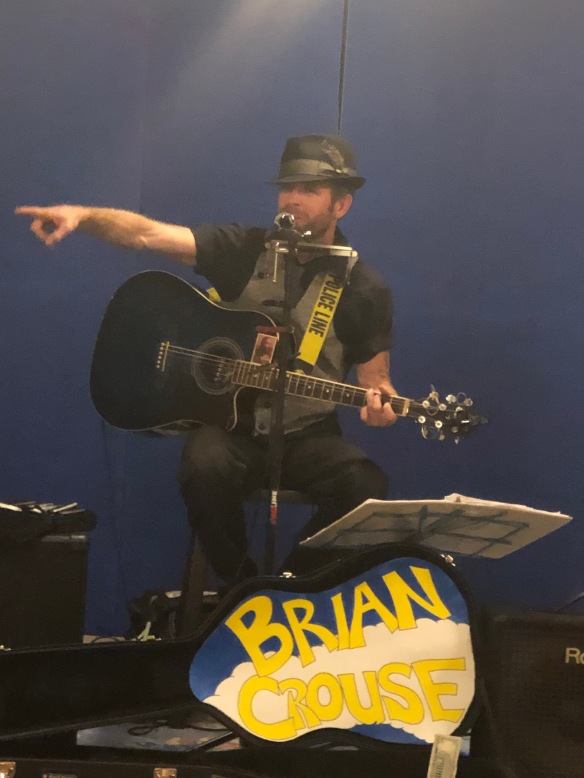 We got settled in our RV spot the following day and started making calls to find a new air conditioner, visions of the sign at NIRVC indicating at least a 3 month wait for air conditioning units and toilets went dancing through our heads.

We eventually found a shop in the nearby town that could have one delivered in 7-10 days.

In the meantime we were left to enjoy all that the Y Knot winery had to offer, especially their A/C, we could have been stranded in a worse place. 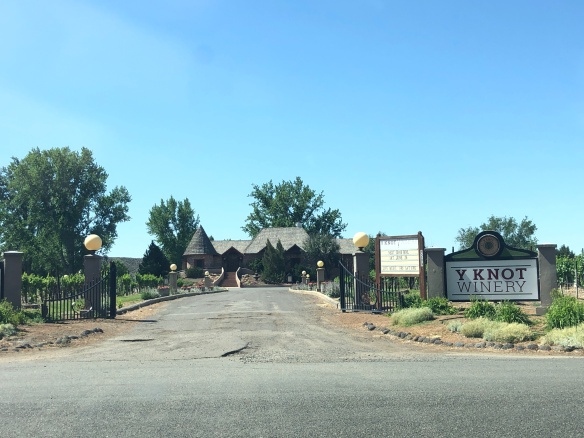 We visited the Peregrine Fund’s World Center For Birds of Prey just outside of Boise ID. 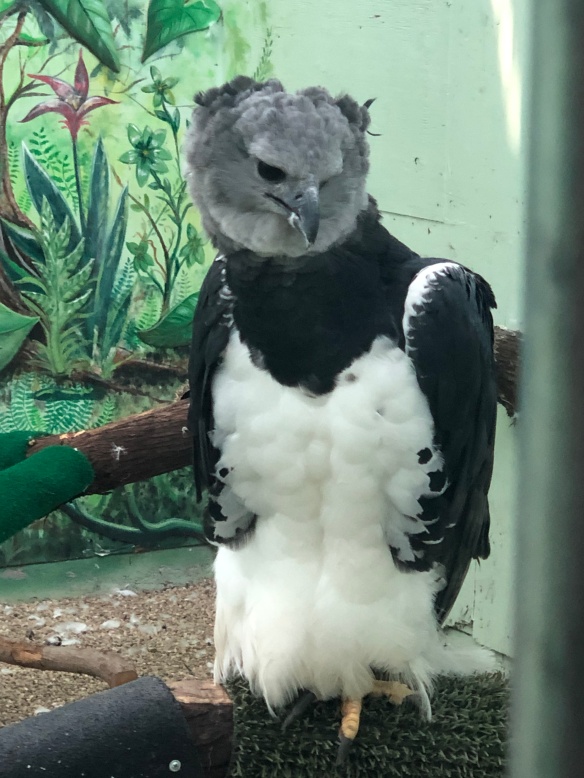 We drove up into the Boise National Forest looking for lower temperatures, it turned out to be a beautiful area and a popular spot for people getting out of Boise. 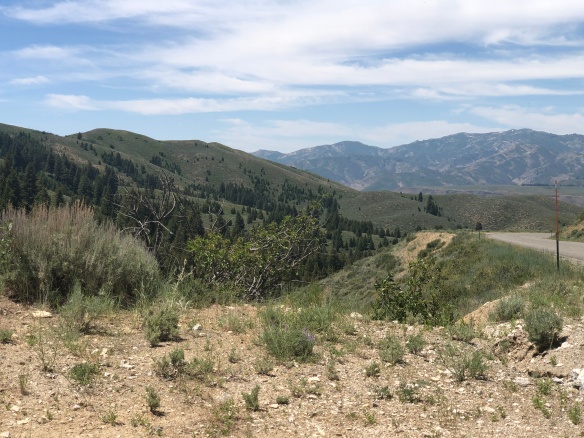 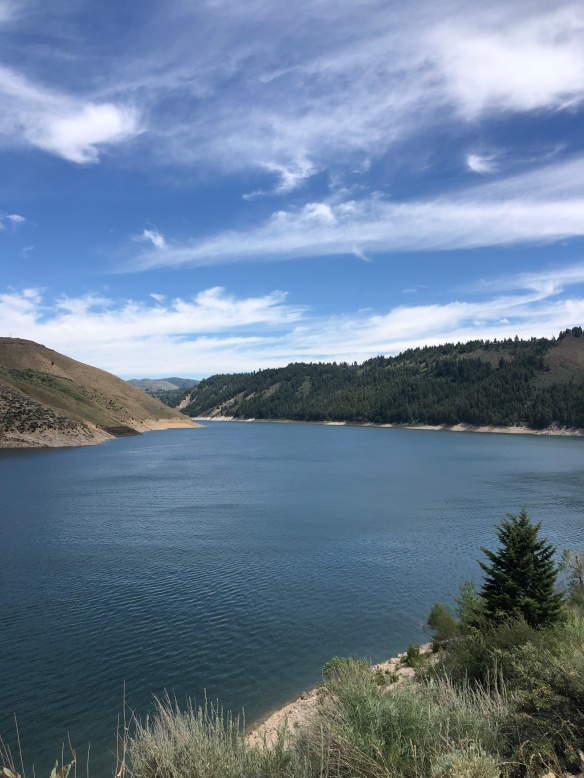 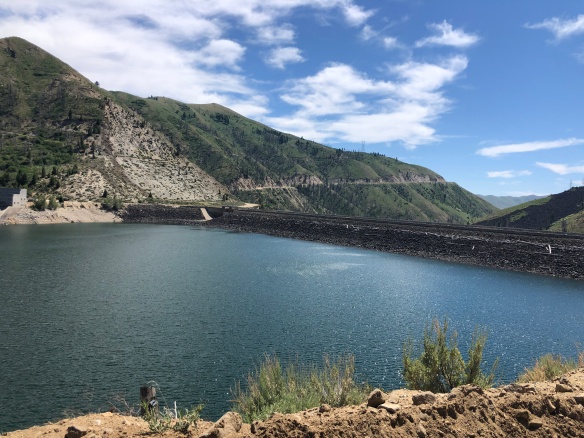 A week later the repair shop in Mountain Home called to advise us that they’d received the A/C, so we drove the 30 miles to get it installed. 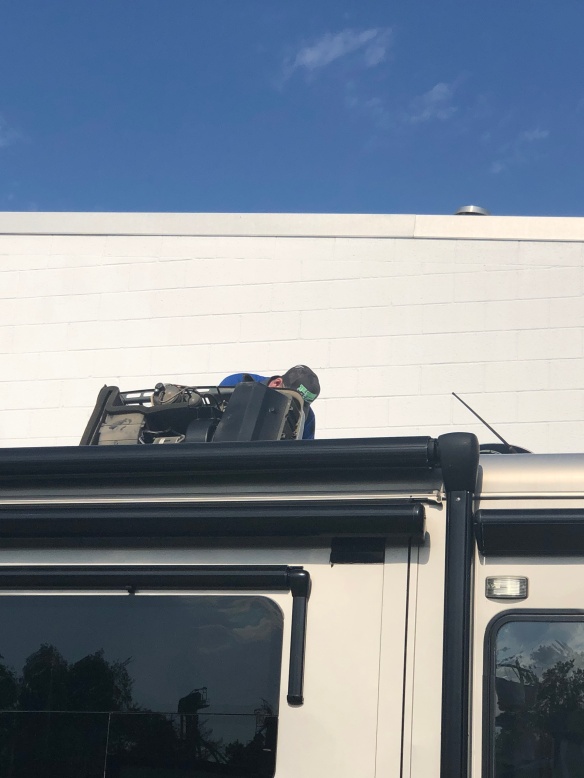 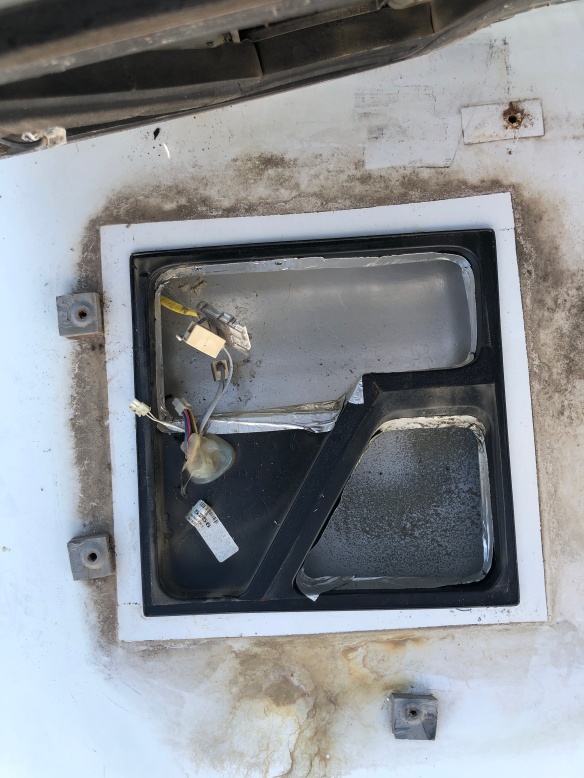 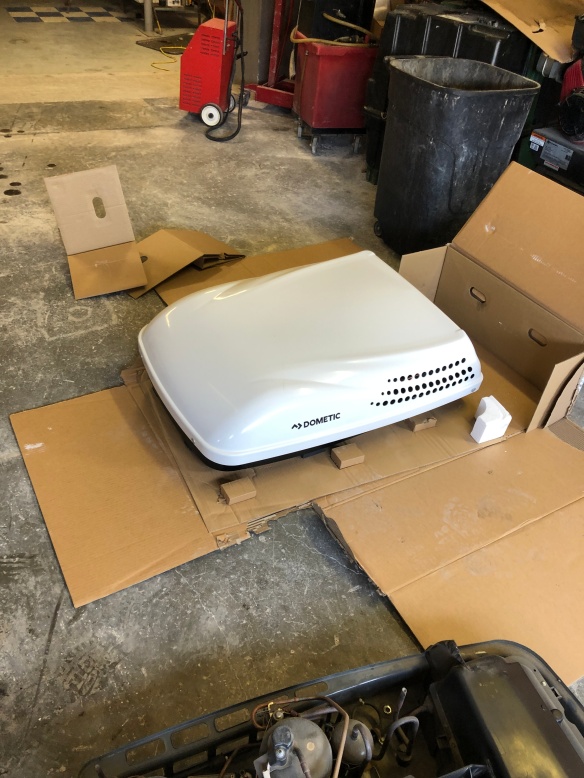 It took most of the day to install, but once we’d tested it and it was working, we headed north.

Our next stop was the other side of Boise and I remember saying, “ well we’ll miss Boise, just have to visit another time”, little did I know it would be sooner than we planned.