While in Bluff our hot water failed, and as this had happened before back in GA. Steve saw that the light for the summer loop was red on the control panel. Steve was diagnosing the issue and determined it was a summer pump issue. Steve contacted ITR Heat to  confirm and they said the fuse for summer loop had to be upgraded from the 5 to a 10 amp fuse and it was a known problem.  Even the 10 amp would blow immediately, which proved the summer pump was bad(second one), so it was either go to Phoenix or back to Grand Junction, being a known issue the part was in stock at both repair shops we trust. Hopefully they’ve fixed this issue in younger models. With temperatures at 108 in Phoenix and RV parking at a premium, we decided to go back to Transwest in Grand Junction where it was 98 and some smoke, to have it repaired and get the 6 bay door actuators replaced at the same time. We drove the 3.5 hrs on Thursday for a 8:30 a.m. appointment on Friday, scouting out a boondocking spot on the way for our return journey.

Upon arrival they hadn’t any record of our appointment and the Manager who booked it was out of reach. Looking around there were 2 other motor homes waiting for service, so this could have been an all day affair. Fortunately they did the repairs and we were heading out by 2 p.m. to find a place for the night. Being a Friday we hotfooted it back to the spot we’d scouted, a BLM area 30 miles from Grand Junction called Rabbit Valley Camping Area.  All was good, the area was pretty empty when we arrived, but started to fill up later in the afternoon, but was quiet in our little site for one. 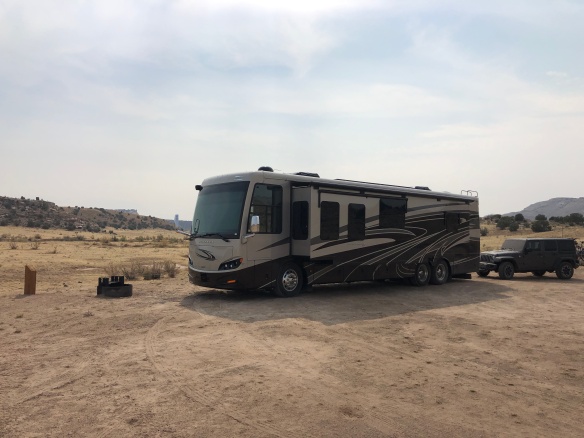 We started on our journey back to Bluff area and decided to check out Kens Lake Campground just outside of Moab. It was closed when we were in the area last year when we ended up camping on the airport runway. It looked pretty nice with a few available spots so we decided to stay for the night, which turned into two

We were in an area called Spanish Valley and behind us was a mountain range with a very inviting trail, on the left of the picture below.

We found the trailhead for Steel Bender quite easily, but it was getting late and we didn’t have any water with us so decided to  go back the following day. When we arrived back home Chris contacted a fellow Jeeper who’d driven around the area, first thing she said “whatever you do , don’t go on the Steel Bender trail, it’s very dangerous “

We left Moab after a couple of days  and drove back to Bluff, using it as a stopover on our way to AZ. This time we camped at Sand Island Campground, on the San Juan River, a dry camping area for $5 per night. A nice park with 2 loops and 20 sites in each. Only 2 other campers were parked here and 4 or 5 sites would accommodate our 40’ rig. 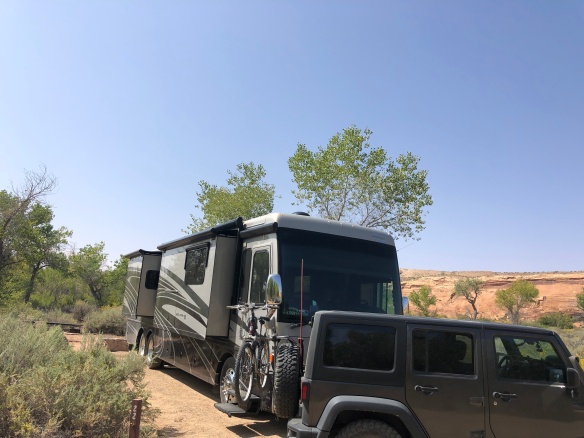 The Sand Island Petroglyphs are located close to the campground along this wall. They are from 300 to 3000 years old and depict horned animals, hunters and a Kokopelli playing a flute. 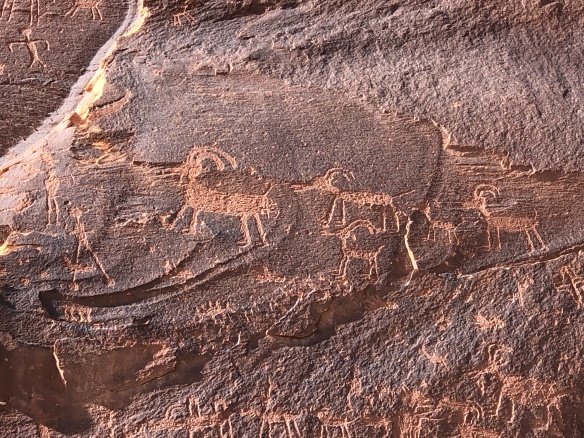 We stayed a couple of nights before moving on toward AZ through 4 hours of Native American terrain, which in the past we’ve found to be quite boring, but just 15 minutes into our drive we were proven totally wrong to generalize.