We left our monthly stay in Delta and headed south towards Durango CO. We elected not to travel on the “million dollar” highway via Ouray, us scared, no, just surprisingly cautious. Instead we took a slightly longer route via Telluride. It was a 3 + hour scenic drive, and we elected to stop over in a small mountain campground to break the journey. 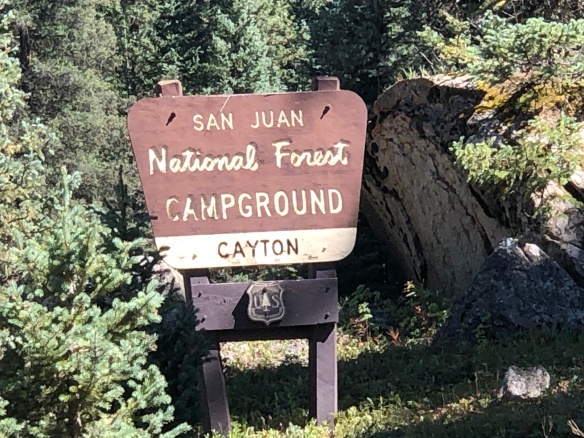 The little village of Rico a short drive away, a popular spot for fishing and biking.

The following morning we left early and found ourselves at a loose end, too early to check in to our next campground. So we found a park, parked, and watched the locals playing a game of frisbee football. It turned out they were the local emergency services personnel doing some team building and they would also do different exercises after each touchdown. 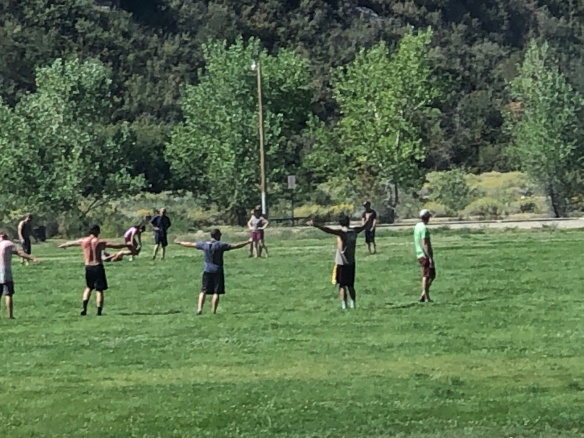 We arrived at Echo Basin Ranch early afternoon and were escorted to our really beautiful site. No neighbors and a view of a field. Perfect! The ranch is family owned and nicely run, landscaping is meticulous and you see the family in action day and night. They had a restaurant and bar onsite as well as a pool and apparently a golf course in the infant stages of development.

We were in the town of Mancos in the Echo Basin region another area favored by Jeepers  for its numerous trails. We were here for a  week and it seemed there was plenty to see. 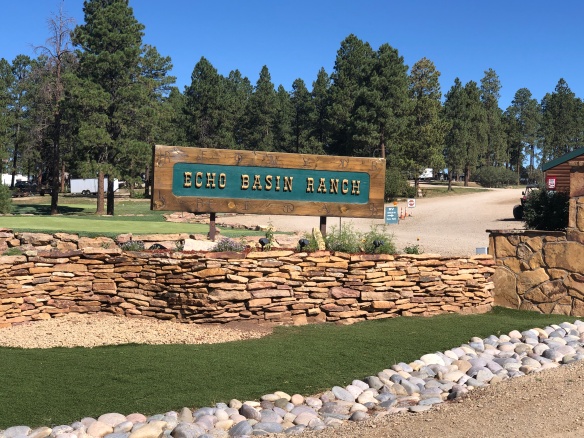 Main Avenue is a Nationally Registered Historic District that cuts through downtown Durango and is home to galleries, boutiques, restaurants, bars, and other businesses. Two notable and historic hotels, The General Palmer and The Strater, lie at the south end of the avenue, near the Durango & Silverton Narrow Gauge Railroad depot. Unfortunately the train wasn’t in service, much to the chagrin of the store owners as this is a huge draw for tourists, but we took advantage of a near empty town to explore 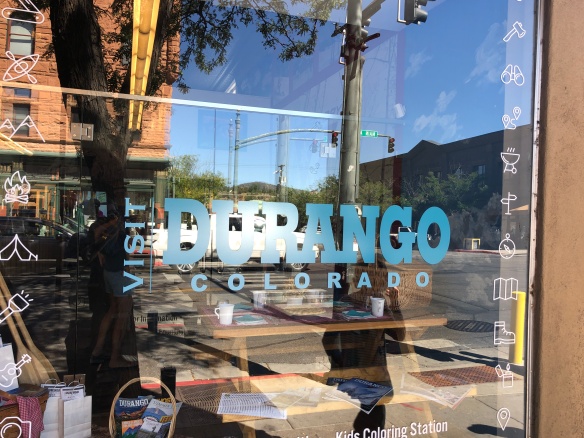 It was encouraging to see a rally advertised, but word went out while we were there that it was cancelled

An interesting occupation with little monetary investment, wood from the riverbed, magnifying glass and the sun. 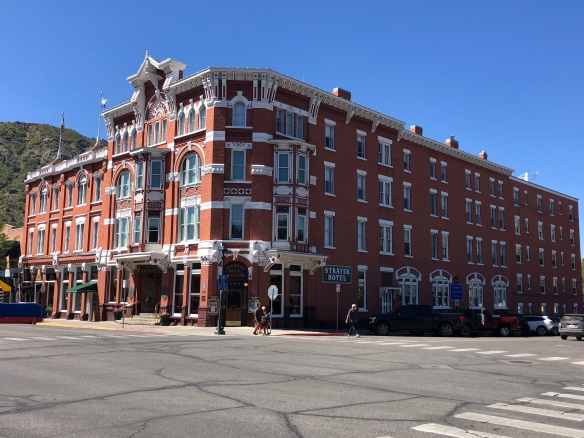 Because the Durango to Silverton train wasn’t operating we decided to drive the route instead, but before we left we went to the Visitors Center as usual and gathered some maps. Chris was reading the information en route and found a detour from the highway called Lime Creek Rd. Off we went driving down a seemingly docile trail parallel to the train tracks. 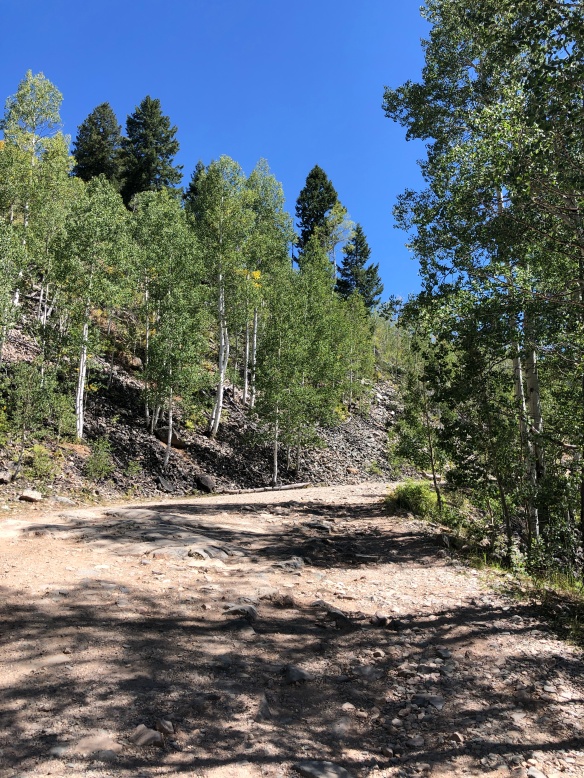 The road began to get rockier and narrower and we stopped for someone in a Lexus who decided to go back, and continued on our way.

At about 9,000’ Chris noticed that our leaflets indicated that this was a “moderate” trail, she decided to keep schtum and hope for the best.

Most of the trail was shelf road with huge drops on the passenger side, but magnificent views. 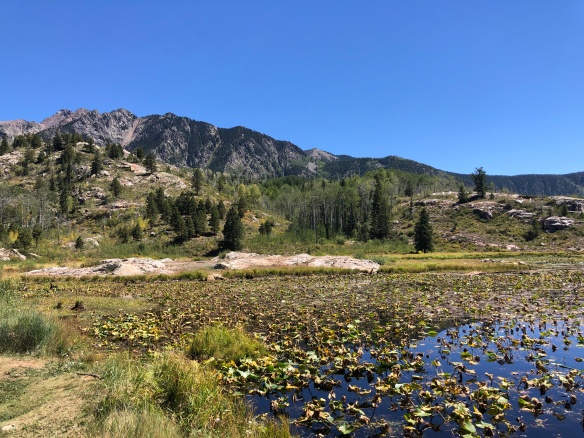 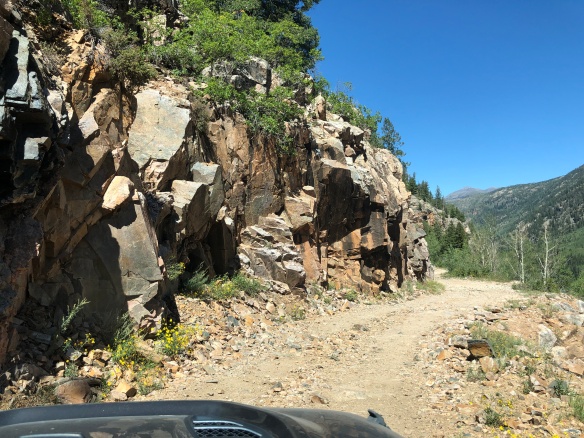 Arriving at Silverton we were surprised at how different it was from the other towns we’d been to lately, very laid back and probably more like Durango was before the tourist rush.

Silverton is one of the highest towns in the US at 9,300’ and its trails attract thousands of ATV, OHV and Jeepers from far and wide. Strange thing is, someone told us there isn’t a soul in town who repairs them. 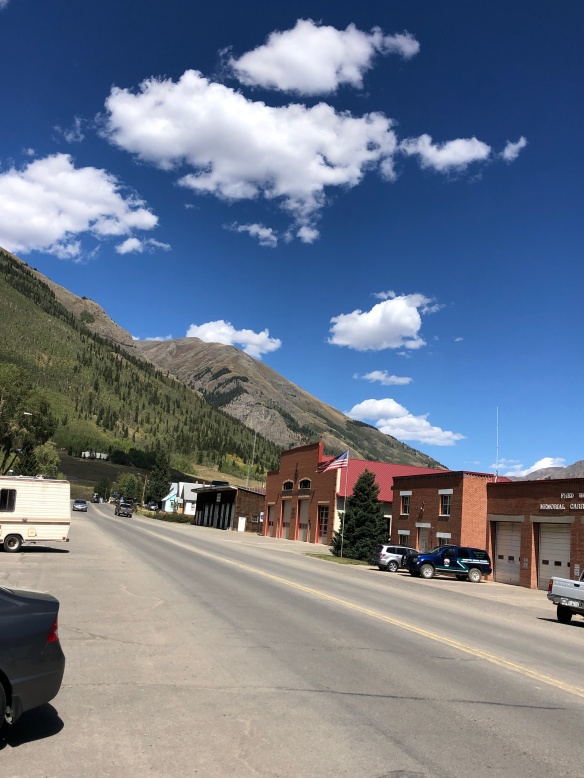 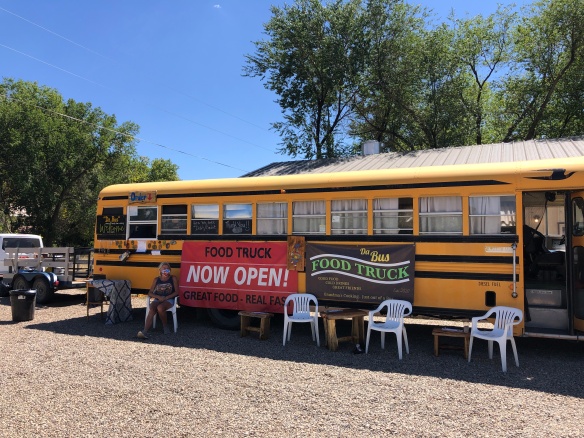 Before we left Echo Basin we found  a wash and wax outfit. They did a fine job for $6 a foot. They were Mexicans from Yuma taking a break from the heat, so we’ll no doubt see them again this winter.

For Labor Day, the park put on a couple of events including rides around the resort in horse and buggy.

The weather forecast was predicting snow in higher elevations and we thought we were on the cusp, but one morning we were a bit surprised to wake up to a winter wonderland.

Fortunately we were getting ready to leave, so up with the jacks, slides in, and off we went.