We were going to try Yuma AZ again for December, and hoped it would  be warmer then it was last year. We drove the short drive south on Rte 95 and as we approached Yuma we saw the familiar fields of green in an otherwise desolate SW desert. We wanted to spend Thanksgiving in another Escapee park so we could get a turkey dinner without trying to cook it in the coach. We checked into the SKP KOFA Ko-op Retreat for the first timer rate of $100.00 + electric ($8.00) for the week. A nice fairly spacious site again. The other reason for staying here was to suss out the area for a month stay in December.

Turkey dinner was delightful. Chris was sitting with a 90 year old who proceeded to tell her her life story with all 3 husbands, she had been living at this campground for 37 years when it first opened. Average age here is pretty high, so it was quiet with little to do and we were looking for a resort with all the activities 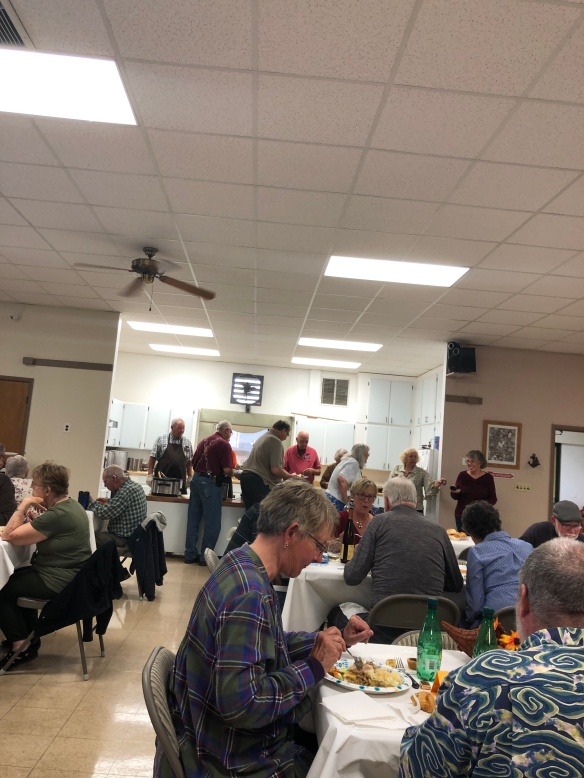 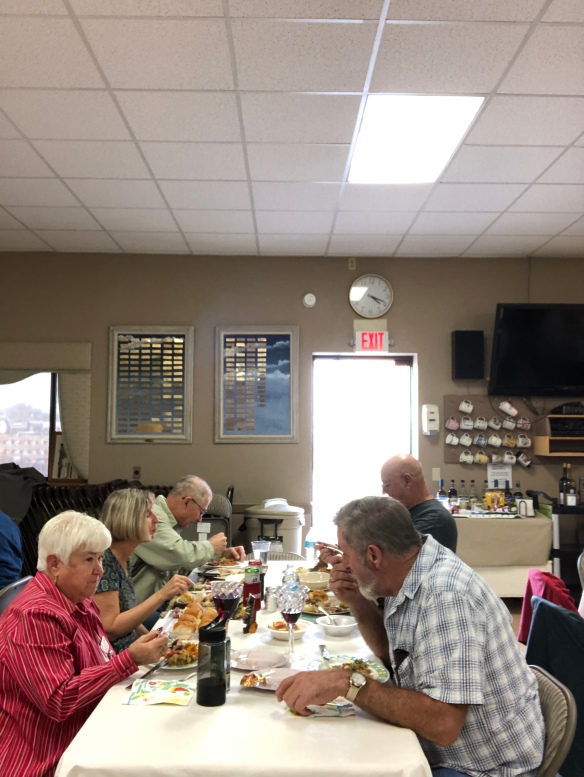 They had a dog show at the Yuma Fairgrounds, so we stopped in to see the doggies.

This little one was perfectly content here all the afternoon, didn’t want to mess up her hair

It was a very professional affair and dogs were fabulous. 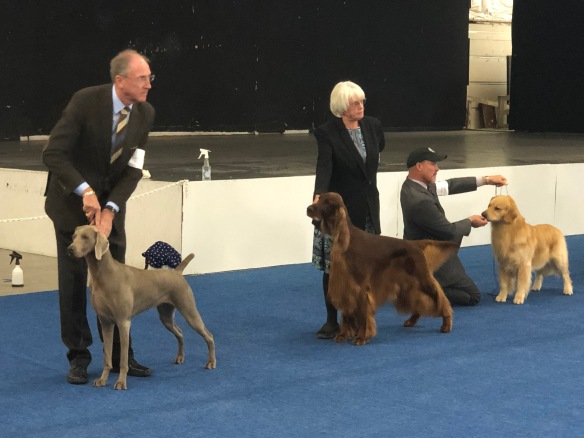 Played a round at Desert Hills Golf Course. 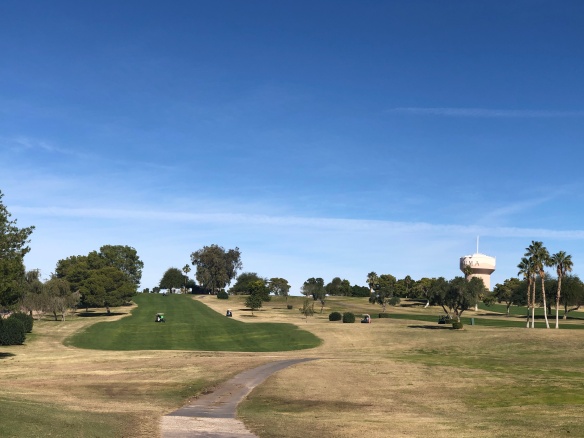 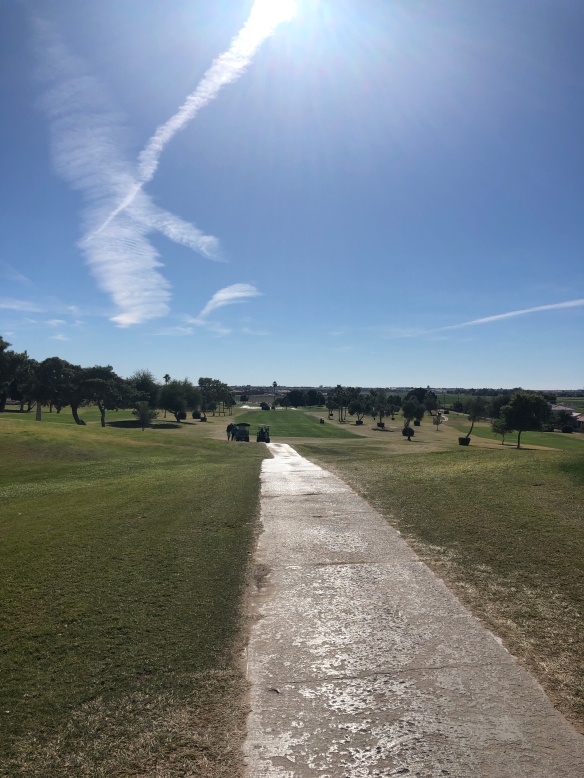 After a week we left the Escapee park and moved in just around the corner to Del Pueblo RV Park and Tennis Resort (well no tennis as pickleball has taken over).

It was still pretty quiet as many people arrive in January and residents are flying in and out to visit family over the Thanksgiving and Christmas holidays.

Still, it was a very nice spacious site with neighbors on one side only. Most of the campers here are from BC, Alberta, Montana, OR and other northwestern states.

Chris quickly found her way to the pickleball courts 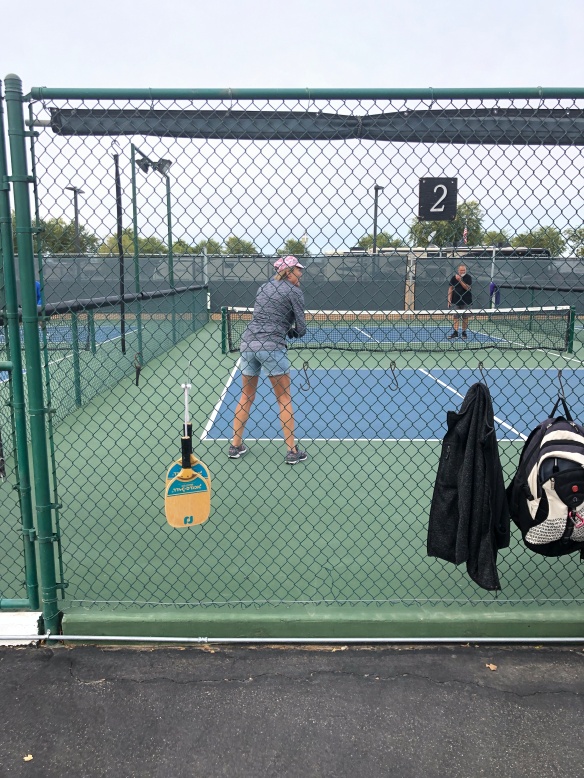 This was a first, a complete dog wash including apron, soap and dryers

We met a great group of people who were really hospitable and taught us shuffleboard, bocci ball, and various card games. We tried our hand at every activity the resort had to offer, except the water sports which started in January. 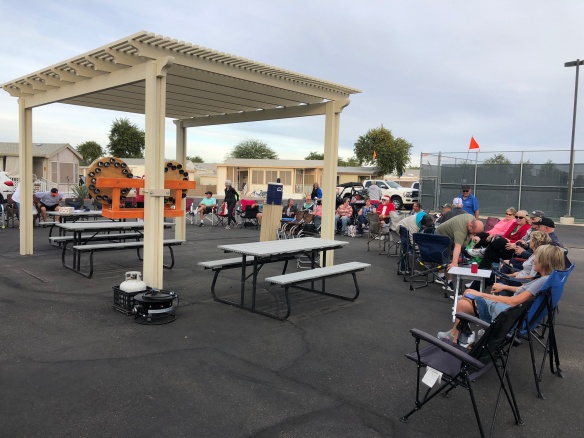 Bocci ball was a Saturday morning event. An interesting fact that we were unaware of. Each activity had to have a “Ramrod” someone responsible for organising that activity. But it had to be an American citizen, not a Canadian, as that would be taking work away from a US citizen, even though it wasn’t a paying job. The punishment if caught was banishment from the US, never to be allowed re-entry.

Drove 2 miles to the local casino for our slots fix.

Every Saturday night there was dinner and themed evening at our resort , this was  Sock Hop night.

And Chris found a jiving partner 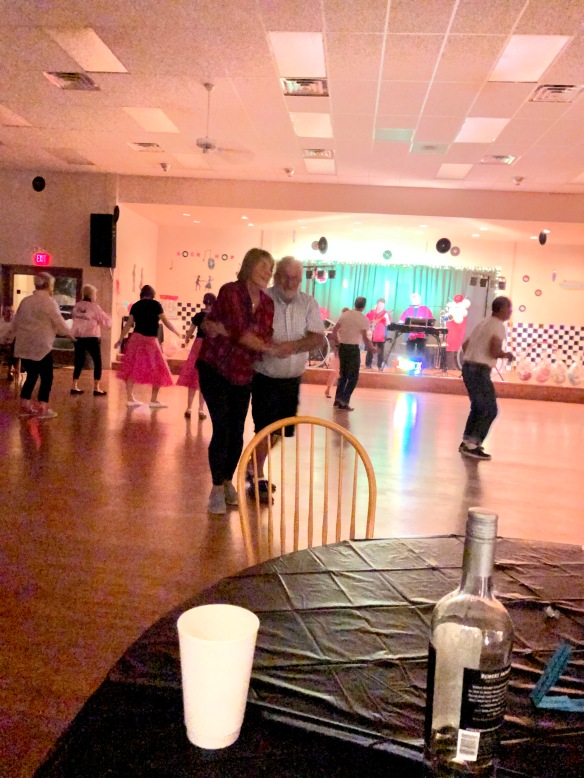 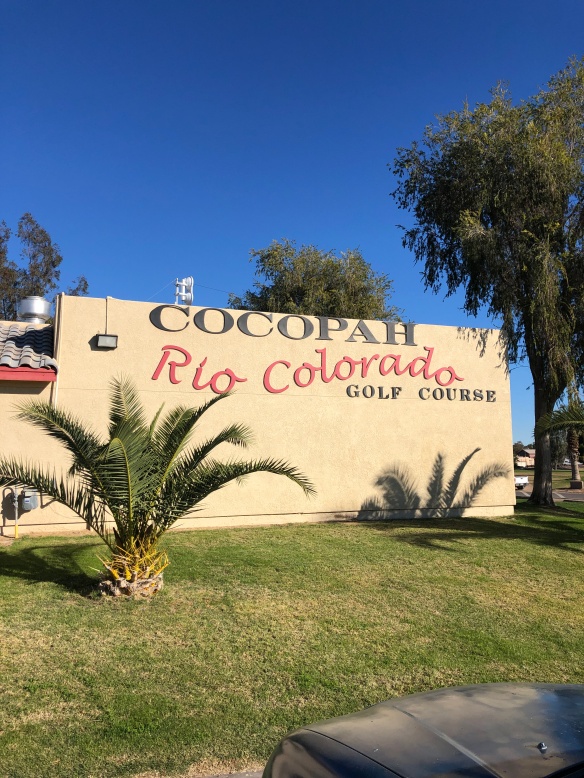 As usual there were RV service people around the park and it was time to have the tanks flushed. Very convenient not to have to move the coach 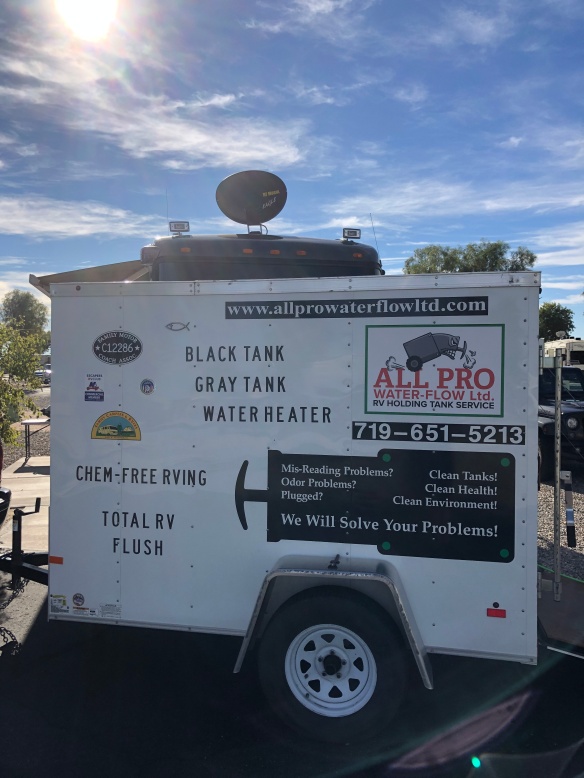 We ventured a few miles away to the tent shopping area, which caters mainly to campers and bought New Shade Pro dash mat. They call Yuma “Canadas’ southern most city ” in the winter as they triple the population during the winter season 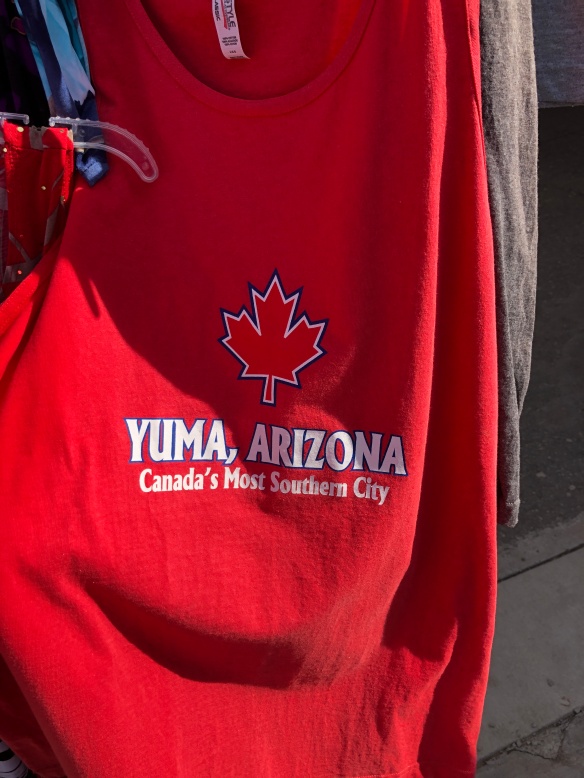 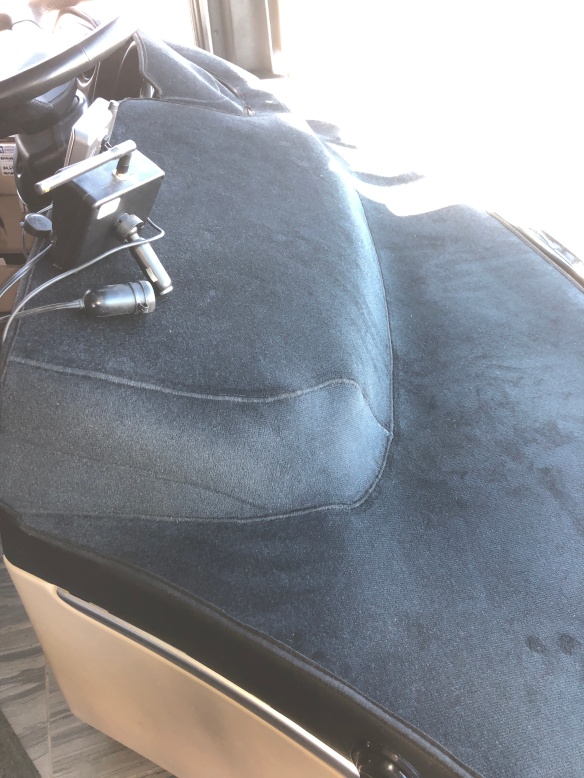 Christmas parade in the park was a lot of fun. A lot of work was put into some of the floats

Ok, on to ping-pong, this was more tiring than pickle ball. You have to hit alternate shots with your partner, so a lot of running around and confusion, also a lot of laughing.

Most evenings there was a card game, this one was Pegs and Jokers, but they had Cribbage, Pokeeno, Hand and Foot which they were happy to teach us

Exhibits from the Yuma Proving Ground

And of course some musical entertainment while we stuffed ourselves with tamales.

Each of the tents on the right had their own tamale recipe, even a sweet selection of date and walnut tamale.

It attracted a host of hungry attendees 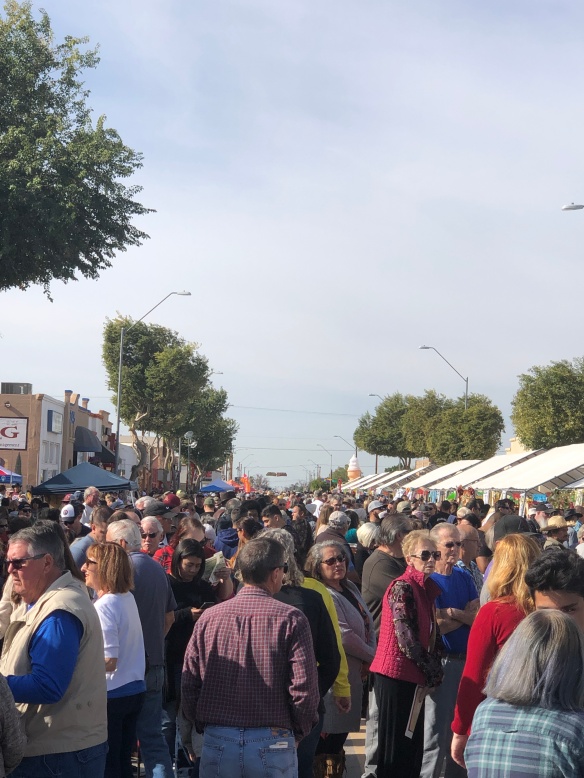 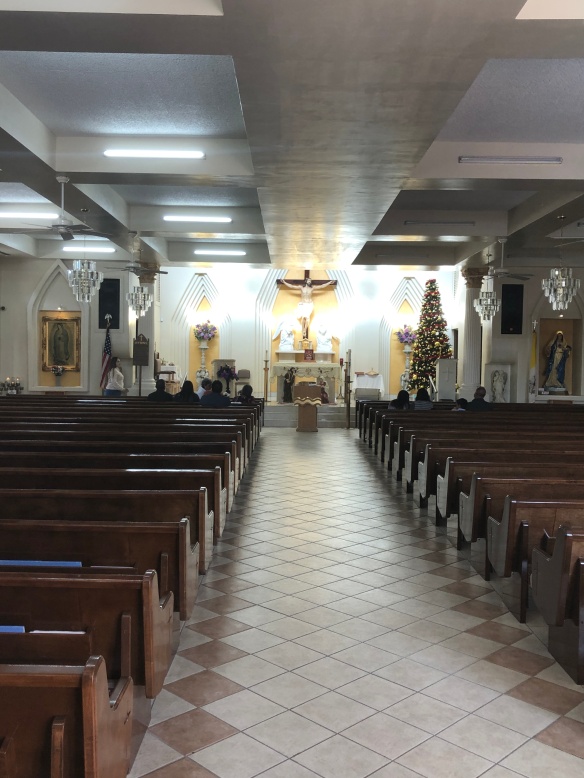 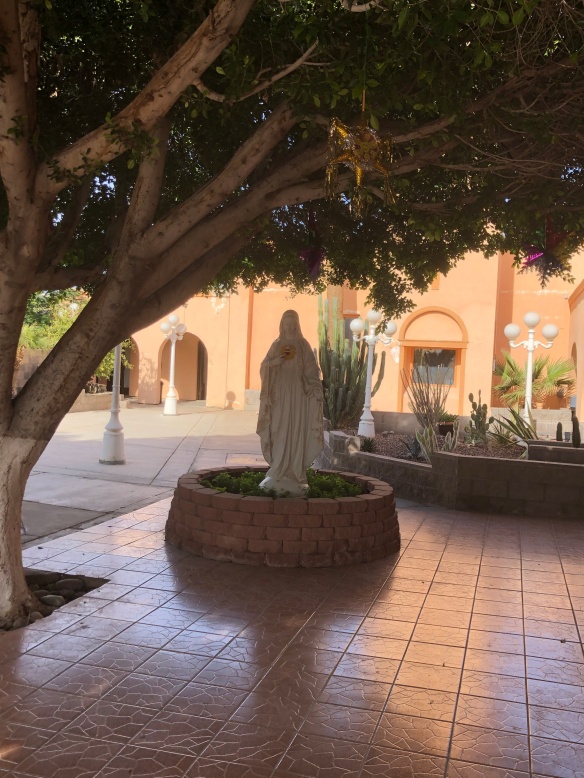 Our neighbor across the road kindly cooked a turkey dinner on Christmas Day and invited us and a couple of other neighbors, who brought the sides. It was the perfect afternoon for eating outside luckily, we had visions of taking our turkey to go. 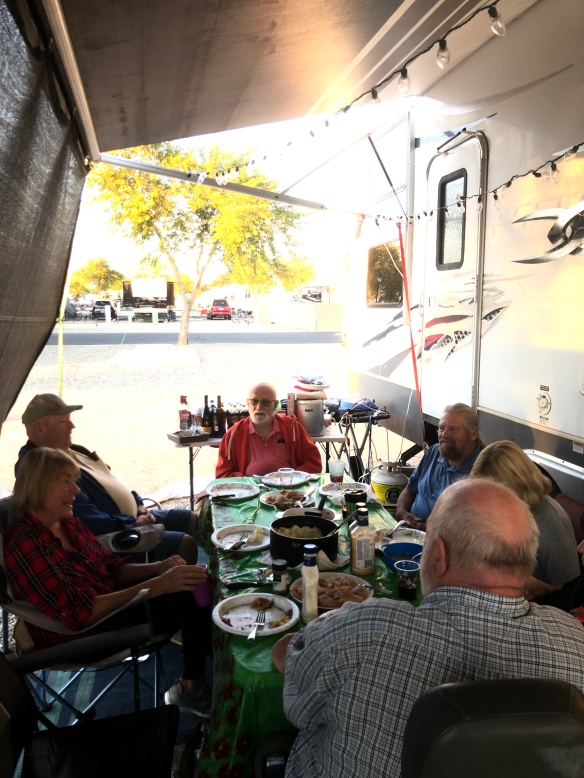 Migrant workers harvesting the last of the cabbages

All these fields were in various stages of growth, from seedlings to harvesting. 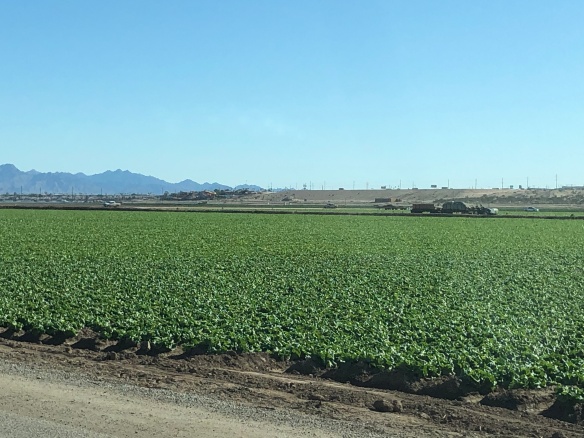 Once again, I wish they’d label what everything is, the obvious ones were cauliflower, kale, cabbage and all the fruit trees, but dozens of herbs are grown here too. 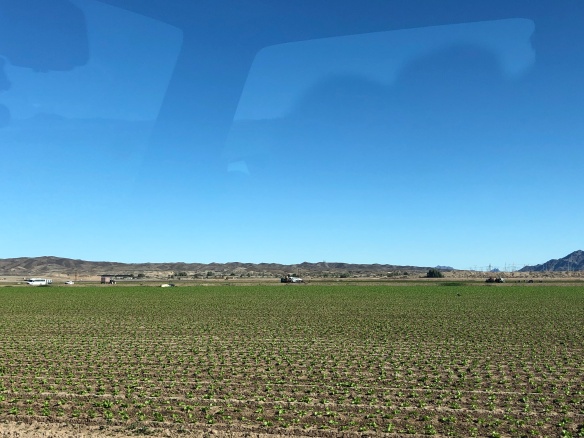 Time for a wash and wax before we leave, another service at the resort.

The month at Del Pueblo passed very quickly, and we tried every activity they offered, a trip or two to the dentist in Mexico was also fit into the month. We met a  great bunch of people at the resort who we’ll miss, but perhaps next year we’ll be back, or maybe even sooner. Happy New Year!!!

Early arrivals to the New Year festivities hoping to get their prime rib dinner first.