Now on to the more touristy session of our program. Still at Valley Sunset RV Ranch in Delta CO and touring around. This is certainly a great central point.

About an hour south is Ouray, we went there mid-week to avoid the crowds but it was still busy.

Situated in the heart of the San Juan Mountains, Ouray is named after Chief Ouray of the Ute Indians. This used to be a strictly summer resort town until it became home to the best ice-climbing in the world

First stop, the visitors center where we given a package of information, even a map of the public restrooms, how thoughtful and very useful, who knew one would be at the Ouray Police Station.

Amongst our leaflets was a map of Jeep trails, which was tempting but we were unprepared, we at least needed to carry water. The 4-Wheelers club that we belong to have outings all over this area, so we may wait until we can go with them. 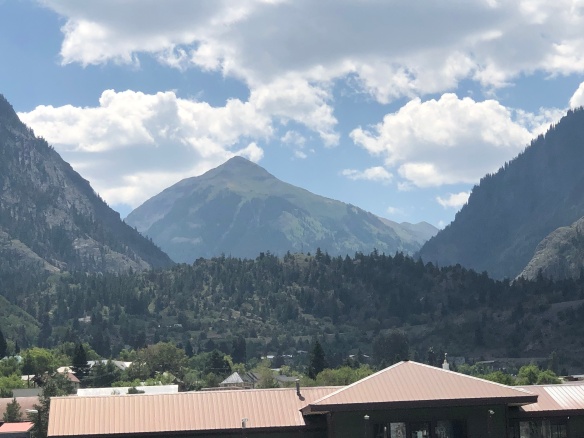 The entirety of Main St. is registered as a National Historic District, most of the buildings dating back to the late 19th century. 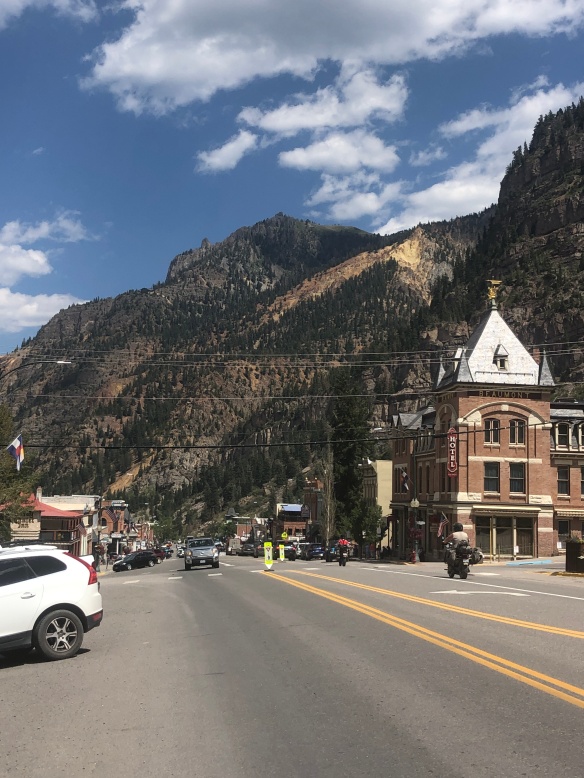 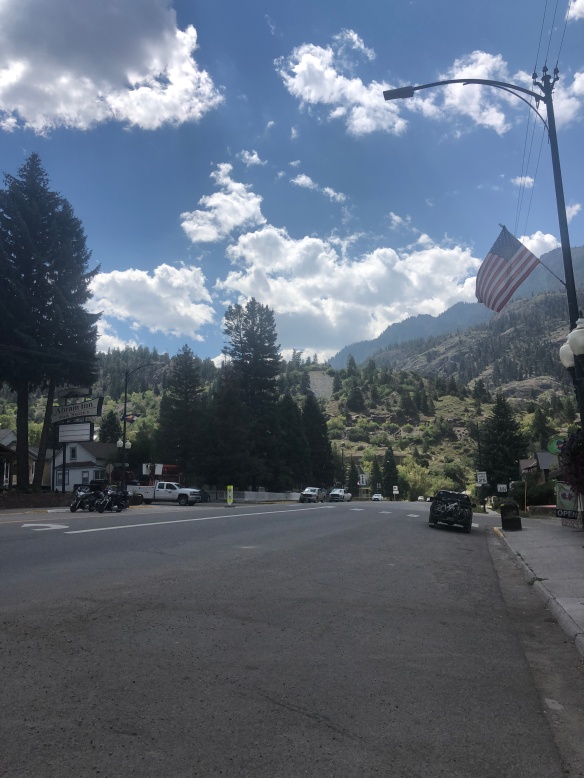 A bite to eat at the local sandwich and donut shop.

The road out of town to the south runs from Ouray to Silverton on Rte 550 known as the “million dollar highway”, and regarded as one of the most beautiful roads in Colorado 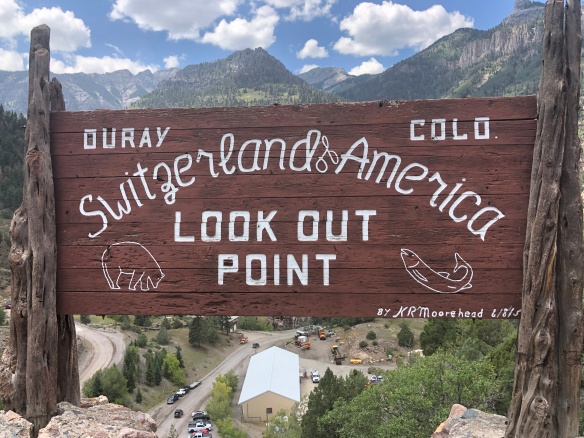 It’s considered a dangerous stretch of road winding through the Uncompanhe Gorge up to the summit of the Red Mountain Pass and beyond. With narrow lanes, hairpin turns and for added excitement, no guardrails. This was also the route we thought we might take south to Durango on our next stop, food for thought. 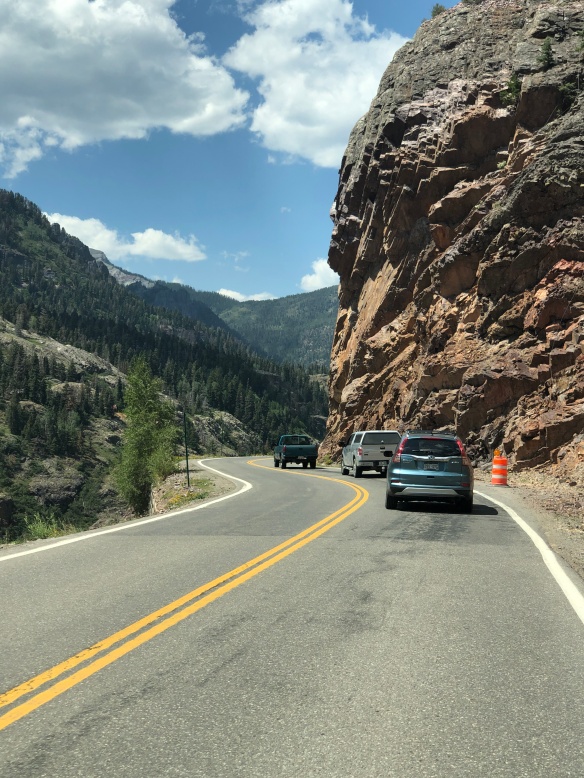 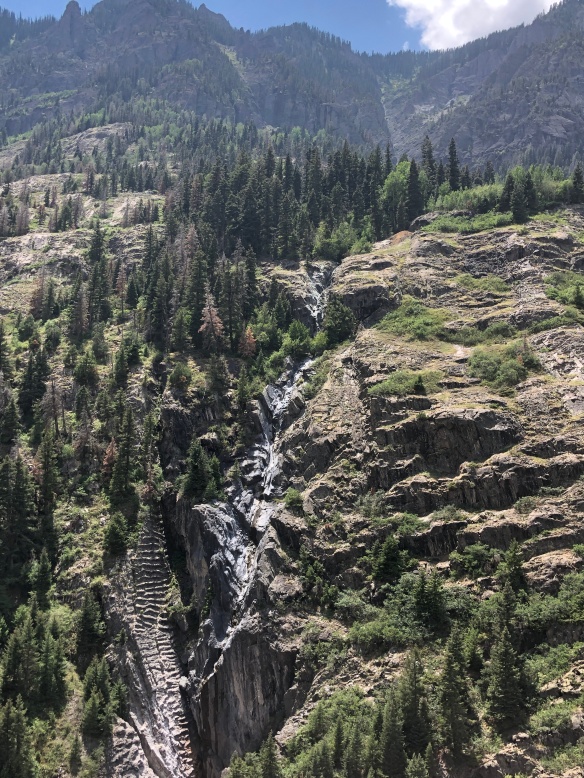 Ouray is the site of the worlds first ice climbing park consisting of dozens of frozen waterfalls from 80-200’. The water is supplied by a sprinkler system and attracts climbers from around the world

Another day trip was to Telluride. There’s a fork in the road coming south from Delta, left fork is to Ouray right is to Telluride, although the towns are only 10 miles apart as the crow flies, it’s an hour drive.

At the fork is the town of Ridgway which used  be merely a stop on the railroad, but has benefited economically from its proximity to Ouray and Telluride.

It’s a quaint little town that has a certain charm with its colorful and eclectic homes and stores and quite a thriving community. Dennis Weaver of Gunsmoke and McCloud fame lived and died in Ridgway. Also, Ralph Lauren has a 17,000 acre cattle ranch here. 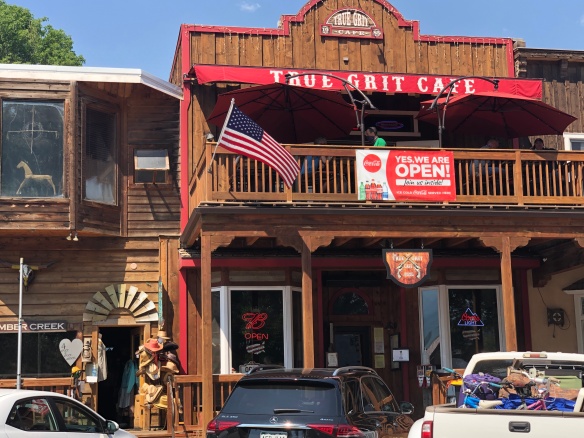 We were taking a picture of this interesting building when a man walking his dog told us that in the basement was a company called Billings Artwork, the makers of the Grammy Award trophies which are exclusively handcrafted here

The Billings Artwork truck. We would have missed this little tidbit had the guy not stopped.

A very insignificant entrance, by design. There’s a little note on the door that states “No Tours”

Arriving in Telluride the first observation was the amount of cars and people. One item of note: There’s a mandatory mask wearing law in CO., and although not everyone complies, most do, which gives you a little comfort. Much more than other states we’ve visited

Telluride’s Main Street is packed with restaurants and one side of the main street is set up for dining,  they had a website to order your food from the restaurants closest to your particular table, and “voila” it was delivered to the table.

Nice “free” ride on the gondola from Mountain Village back into Telluride. It wasn’t a pretty sight the first time we embarked, falling all over each as we tumbled in. We never quite got the hang of it, but it was a lovely ride. 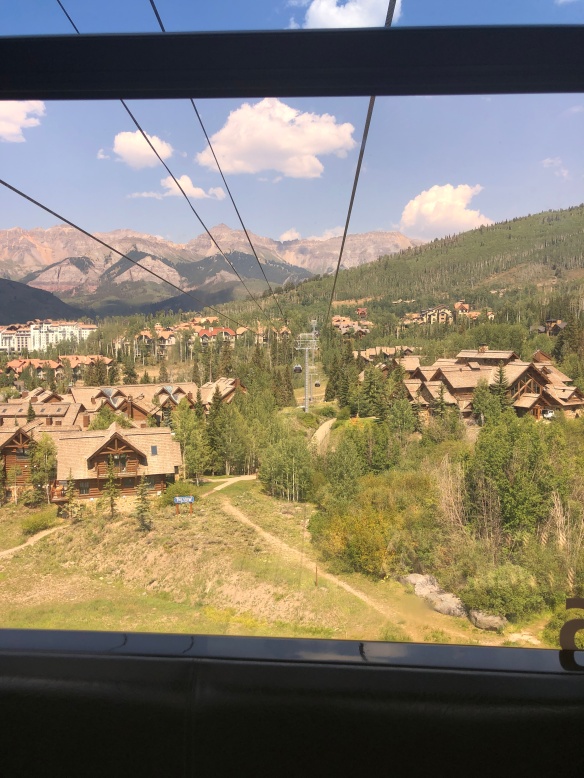 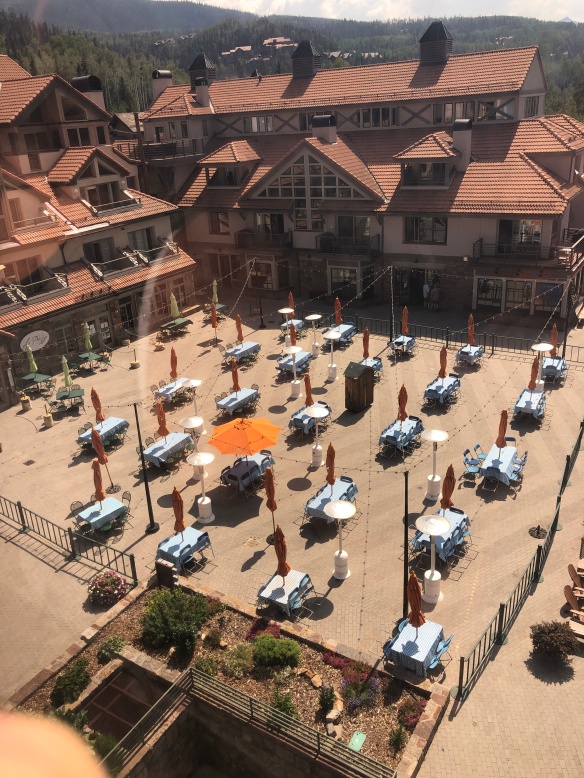 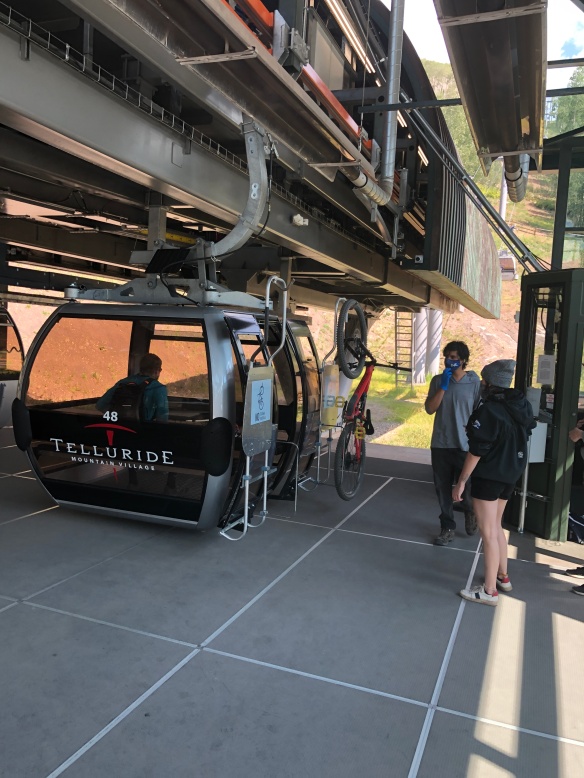 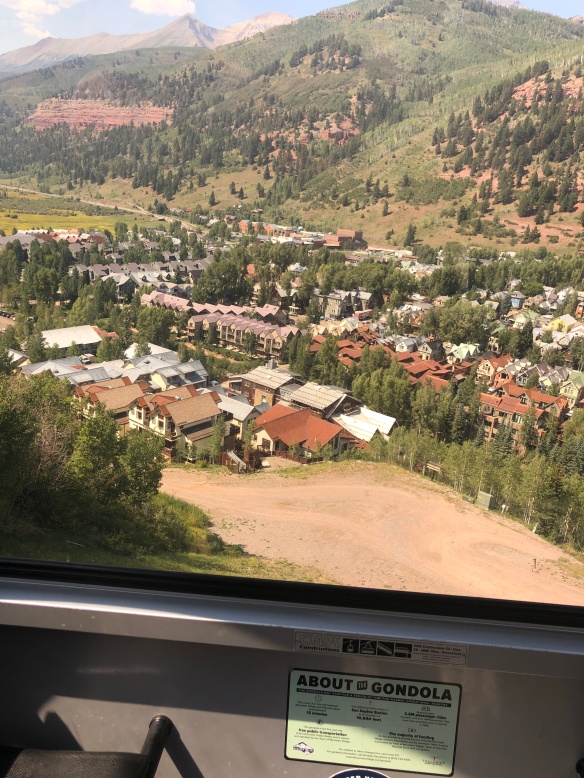 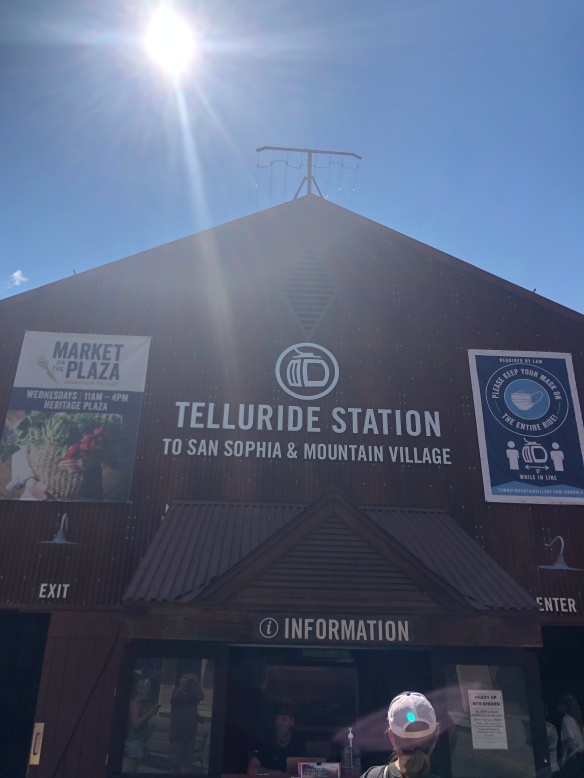 Next trip from home base was to Gunnison to our east and a loop through Crested Butte on the return, passing Blue Mesa reservoir on the way

We did find a good food truck for lunch, but for us Gunnison didn’t offer much else, but perhaps we didn’t try hard enough. 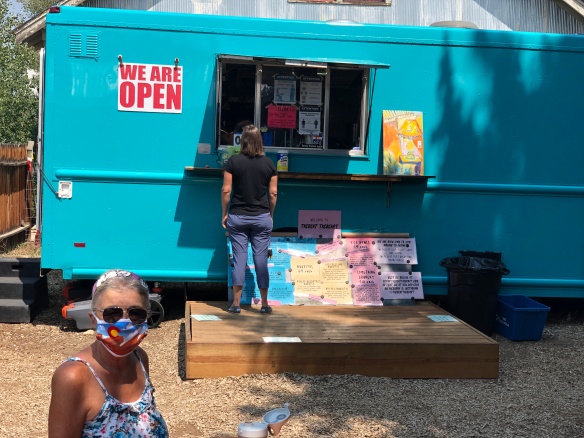 Another Taco Truck and popular in Gunnison 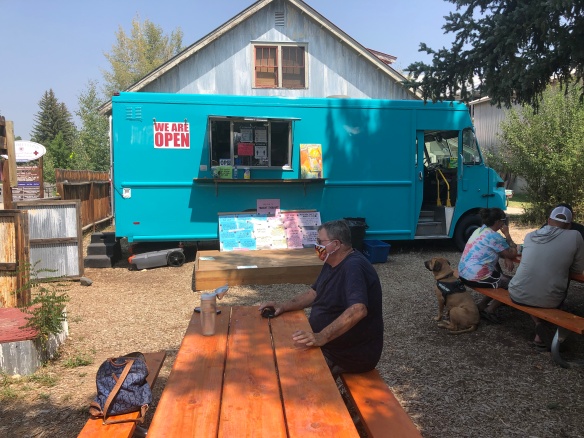 Approaching Crested Butte from Gunnison, we assumed this was the Butte 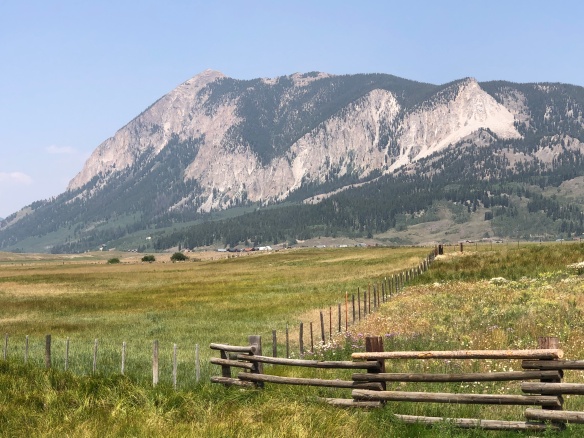 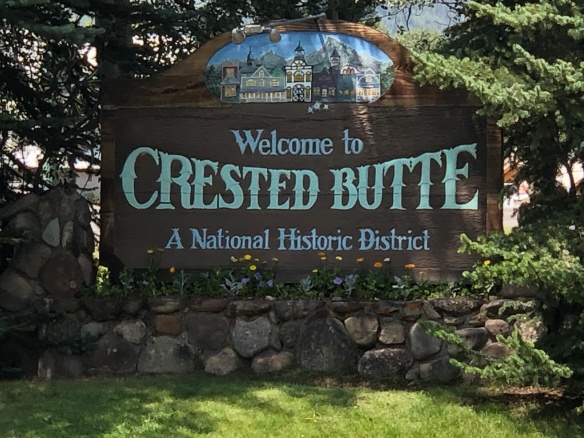 It was a lovely looking town but really crowded, so not advisable for us to mix and mingle with the mostly maskless masses.

It was an interesting and very scenic drive back 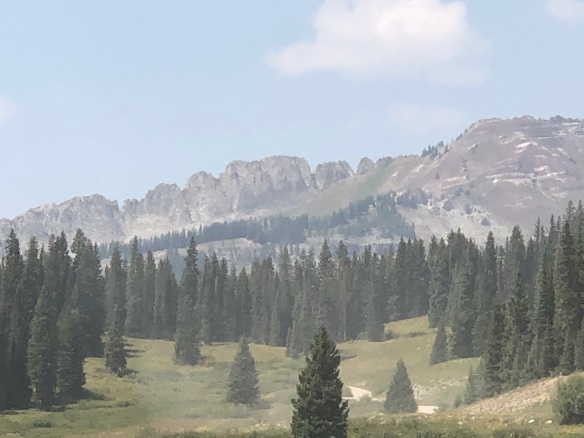 At this point we’d just about exhausted the many sights and towns in the area and started planning our next stop. We’d seen so much of Colorado already there was only one area to see, Durango to the southwest of the state.

It was  still 90/100 degrees in the central part of the state, and Durango was advertising 75 degree temperatures , so time To cool down a bit.